Book 1 in the Barsoom series

In post-Civil War Arizona John Carter has found a gold rich mine. His partner sets out to buy machinery to let them work it properly, but as he leaves the mine site he is set upon by a party of Apaches. Carter sets out to rescue him, but is too late, he does however manage to locate the dead body and free it from the clutches of the “evil injuns”. In doing so he himself is perused and, getting lost, ends up finding refuge in a cave. There he is overcome by something, and finds himself transported, naked, to the surface of the planet Mars.

He meets up with various Martians. Red ones and green ones. Intelligent ones and beast. None of them even half as civilised as a proper human of course.

And, he meets with the princess of the title. 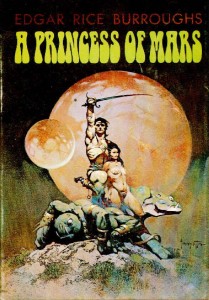 A Princess of Mars

Okay, so they say you should never judge a book by its cover, but I’m going to give you a moment to glance at that cover image. Take it all in. Now, make a judgement call. What do you think this book is like?

If you answered pulp adventure of the swords and sorcery variety with an unbelievable hero who saves the day and gets the girl, well, you’d be right. And if you further speculated that there was plenty of violence and that “the girl” in question was often to be found in distress, that means bonus points for you :)

It isn’t terrible. But it isn’t good. And it is full of dodgy colonial white-man knows best sentiment. Which might give me a topic for my coursera course, we’ll see. Oh, and anti-Bolshvevik sentiment. But if you can ignore all that then, yes, it does have plenty of adventure and derring-do, so if you are looking for that sort of thing, this is the book for you.

As for me? Well, I have to admit that I am sortof interested in reading more about the adventures of John Carter, and I’m definitely interested in the film that came out recently enough. It got a bit hammered in certain sectors but most people seem to say that it is a fine bit of entertainment too. So we will keep an open mind.

Other reviews: All things Andy Gavin ; The literary omnivore ; A man of la book ; & take a look at Carl’s post on some Princess of Mars-esque artwork.