Imagine a world without men. A world where women are able to reproduce without men, where the only children born are female, and where motherhood is all important. Now imagine that you are a young man in the early 1900s who hears about legends of such a community. Terry, Van and Jeff are those young explorers who cannot believe that such a land as Herland could possibly exist.

But exist it does, and they are taken in and learn all about this community that has been cut off from the rest of the world for over two thousand years. 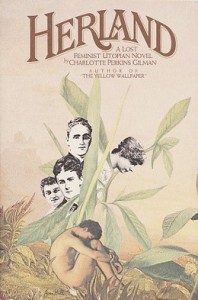 I really wanted to enjoy this book, unfortunately it just didn’t quite do it for me. First of all the idealised Herland was just too perfect. I don’t believe that women are that perfect. And it was more of an anthropological study than a story. We spent the entire book learning about how Herland operated, and came into being.

Also I thought that Terry was just too horrible to be real. Even though I know that he isn’t, and that men who think like him still exist and most definitely did exist back in the 1900s. I just, well, I guess part of me doesn’t want to think that people can be so sexist.

I also objected to the prominence given to motherhood, as though that is all a woman should be interested in.

But a lot of my objections have more to do with the time it was written, and I have to be thankful for how far we have come. Of course we still have a long way to go, but better than we were, that’s for sure.