In the 1880s a young Edgar Rice Burroughs is summoned to his uncle’s home. But when he reaches it he discovers that John Carter is already dead and the body is locked away in his crypt. Ned is to inherit everything, including a journal. In this journal is the story of how John Carter found himself on Mars twenty years earlier. 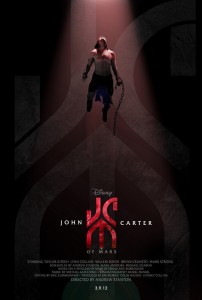 I recently read the book A Princess of Mars which is the source for this film, and while there certainly are quite a few differences plot-wise between the two, the film certainly gets the tone spot on. It is a great fun action romp through Mars. There is romance and battle, plenty of action, and Carter gets to be a hero. All in all it is really enjoyable.

Now, don’t get me wrong, I’m not saying that this is a film that deserves huge critical acclaim. It did not, however, deserve the box office failure. I think it may be making a profit by now, but you have to wonder why it didn’t do better in cinemas. It looks fantastic, I can only imagine how great it must have been on the big screen. I loved the design of the sky ships, and all the settings looked wonderful. Okay, maybe there could have been a tad more action in it, and I’m not sure why so many of the posters seemed to feature the white apes, for all the time they had on screen! but it is a fun film.

I do think that the opening was a mistake. It was almost two framing stories before we got to the action. It slowed the beginning down too much and, really, there wasn’t a huge need for both. I totally understand why they changed the chase scene that leads up to the mysterious cave though, lets just say the source book doesn’t really portray the Native Americans in a very positive light.

What the film got spot on was Carter’s arrival on Mars. I loved his scrabbling and scrambling as he tried to figure out just how to walk without flying off into the air. And I really liked the changes they made to Dejah Thoris’ character. She had plenty of story of her own, and wasn’t just Carter’s prize, as she is in the books.

So if you were put off by the reviews when this one was in the cinemas I would urge you to give it another go. You might just enjoy it.

Other reviews: Stainless Steel Droppings ; Bride of the screen god ; Tales of the marvelous ;