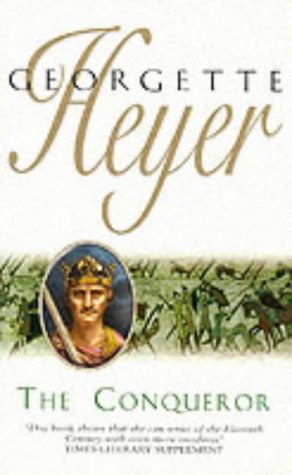 ISBN: 0099416441
You know the way sometimes you see a trailer for a film and think that looks like an entertaining comedy only for it to turn out to be a dark and depressing into someone’s horrific memories[1] well the blurb on the back of this book is that misleading.

I suppose the reason is that most people who read Heyer are looking for a light, easy to read, fun romance, and the publishers probably felt that it was best to market this book the same as all the others. And that is why we get a quote about Mathilda on the back, indicating that the story will be about William the Bastard having her; “Either for love or for hatred”. Well that isn’t what the book is about at all.

Set in the 11th Century The Conqueror is a novel about William the Conqueror, the Norman base-born Duke who became king of England. You know, battle of Hastings, 1066, and all that.

I’d have to say that this is the best of the Heyer’s I’ve read, but in a way it isn’t really fair to compare her other work with this one. This is a serious novel, told through the pov of Raoul de Harcourt who wishes only for justice and peace, for a Normandy with

“law and justice, so that men may no longer burn and slay and pillage at will. I have thought that perhaps some day a man might rise up, with the will and the power to bring order into the Duchy. I would like to fight in his cause.”

Is William to be this man?

I’ll admit I don’t really know a lot about this period, well apart from very basic facts, but Heyer brings it to life. As always she is very careful about the language used, and so this is full of nitherings and beau sires and gonfanons.

Characterwise it is very hard to identify with the Duke himself, but the reader can easily understand why Raoul respects and follows him. William may be a hard man, driven, unemotional, but he is a leader who thinks things through, who is just and fair. But we also see Raoul’s opinions regarding his Duke’s ambitions.

But he knew that he would never be as they were; he must always see the smaller joys and griefs life held, and count them dearer than a distant, splendid goal. There is not one jot of greatness in me , he thought.

Does the end justify the means?

Wikipedia on William the Conqueror | Georgette Heyer.com | Article on William as a leader (pdf) | The Normans