Sequel to Blackout, and set in the Mr. Dunworthy ‘verse. Or at least that’s what I’m calling this series-ish of books.
This is my first read for the 2012 Science Fiction Experience & you can find out what everyone else is reading/watching on the review site.

This is a direct sequel to Blackout and if you haven’t read that you’ll have no idea what is going on here. Really they should probably have been combined into one book. This book starts off in 1940, and Polly, Mike, & Eileen are trapped in London. They are all historians. But these historians do more than research papers and artefacts. They have travelled back in time to research the actual life of their subjects. Mike was researching everyday heroes. Polly had been investigating how people coped with the Blitz, and Eileen’s assignment had involved the children evacuated from London. But none of them could get their drops to reopen and they are now trapped in 1940s London. And faced with the possibility that they are trapped because one of them has done something to introduce a discrepancy! And maybe even lost the allies the war! But historians can’t alter the past, can they? 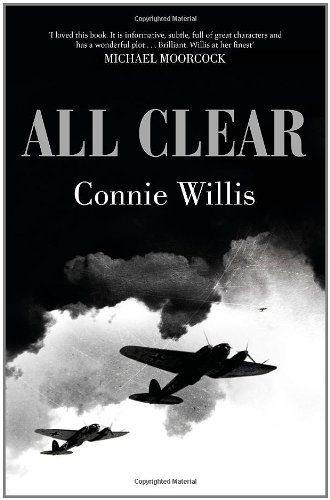 All Clear by Connie Willis

If you remember my review of Blackout then you may recall that I said it was a bit slow to start. Well this doesn’t suffer that problem, however it did take me a chapter or two to remember exactly what had been going on. So if you are planning on reading these I’d have both to hand so there isn’t a gap between them. That way it’ll just read like one really long book, which is how I think it should be read.

And like the first there is loads of fascinating details and historical bits and pieces. If you are a fan of historical fiction you’ll enjoy this part of the story. It was certainly my favourite bit. But the whole mystery surrounding why exactly they were stranded wasn’t that great. And the characters spent too long trying to protect each other from the truth. Come on, you are supposed to be professionals at this business. Don’t be hiding crucial information from each other.

And I also didn’t buy the theory Show Spoiler ▼

that the continuum was out to kill them.

That made no sense to me, considering all the opportunities for that to happen and yet it hadn’t. So that was another aspect that just didn’t ring true for me.

All clear has some great writing. It is very easy to read, and you don’t really want to put it down. But at the same time I felt it was overlong. And bits definitely could have been left out. For a while it felt like the characters were just going in circles, which was accurate in one respect as they tried to solve their own problem and mystery, but at the same time it was annoying to read. Of course, this far into the books you’ll just have to push on through and find out what happens everyone in the end.

The whole Colin – Polly romance did nothing at all for me. Maybe if I’d read some others in the ‘verse recently to get their history fresher in my mind it may have seemed more reasonable. but at first she just dismisses him as a teenage boy with a crush. Which is probably true, but then in the middle of her Blitz experiences she starts thinking that of course he will come and find her. Nah, that is another thing that didn’t really ring true.

But maybe I’m just too cynical :) And despite all my complaints in this review I did enjoy this book. I just think it’d be twice as good if it and Blackout were merged and at least a quarter of each gotten rid of.

Other reviews: Val’s random comments ; Rhapsody in books ; i09
All clear related Pinterest Board