Book one in the Promise of Stones series.

Fox is a young girl growing up on the Stone Body, a land ruled over by the Compionarii. She is a member of an Indiginy tribe. A long time ago the Stone Body was only inhabited by the indiginy peoples, but over one thousand years ago strangers from across the ocean arrived. There was, of course, conflict, but that was resolved with a treaty, and the the two people have lived in relative peace under the terms of that treaty since then. But it is not an equal treaty. The Compionarii rule the land, they are divided into houses based on what crop they produce, and the women who rule them are the companions, the women with the “gravity” to bring forth crops, whether that be oak trees, wheat plants, or horses. 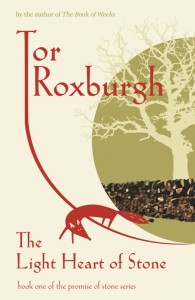 The light heart of stone

But the provinces are failing, the companion women are losing their gravity, and disaster threatens.

Fox is one of the few rare indiginy girls who may have the gift to possibly become a birthmother, and give birth to a new Companion. But that means being taken away from her home and her family, abandoning her heritage and culture, and hiding her true self under a Compionarii mask.

If that sounds a bit complicated and off-putting ignore it. Because this is a wonderful book. I loved it. I didn’t think I would when I first read about it on Adventures of a Bookonaut but it did seem intriguing and I always like to try a new author. And I am so glad I did. It is a great tale of a girl who grows up far from home. It is the story of an old woman coming to terms with her culture’s wrongs and trespasses. It is a story of colonists and the colonised, of losing your heritage and being a second class citizen in your own land. Of having your society, beliefs, and ways of doing things criticised and held as “barbarous”, and knowing that that isn’t true, but having to deal with it because how else do you survive.

And quite apart from the whole interesting sociological or cultural issues there is the story and the writing itself. Its just great.

I loved the indiginy’s Four Stories. It rang some bells with me, but I don’t know if it is similar to some folk custom or if it just makes sense to me. And the religions were great, the compionarii’s gods who have turned their backs on their people to let them grow up, that’s a really interesting idea.

I’d never heard of Roxburgh before, but I’ll certainly be looking out for more by her.

Other reviews: Adventures of a Bookonaut ; if you have reviewed this let me know & I’ll add your link.