Book one in the Milkweed Triptych

In a remote part of Germany a doctor has been hard at work, he has had plenty of test subjects, the Great War left many orphans and foundlings, and he paid good money for them. Not many survive. An outbreak of influenza, or so he claims. The reality is very different. He has been experimenting on the children, torturing them and surgically altering them. Turning them into supersoldiers. Out of all those who ended up in his home few now remain; but they can do great things. Walk through walls, immolate buildings and people, turn invisible, and see the future.

English intelligent is set on their trail almost by accident, but they don’t know what they are up against. So they turn to England’s old magics and the warlocks.

Okay, if that hasn’t hooked you already then I’m not sure what will. Super-soldier Nazis and warlocks. Come on, that’s intriguing, is it not? 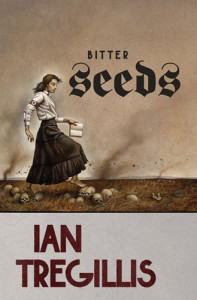 However, if that description has you in mind of an adventure story well, I don’t think you’ll get quite what you expect. Yes, technically there are adventure scenes, battles and spies, heroes and villains. But I think that in this book Tregillis has set out to show that war is a dirty business and everyone involved gets their hands dirty, very dirty in some cases. His characters are not neatly divisible into good and evil.

I suppose there are a few who we can say with are the bad guys. The doctor. Gretel. But they don’t have their “good” counterparts. We have the allies, the guys we are supposed to be rooting for, but they do their share of evil deeds. Perhaps in the name of the innocent, but really? we have all heard what the road to hell is paved with.

It is a very well told story, even if I didn’t really like any of the characters. But I did understand them, and empathise with some of them to varying degrees, and that is the important thing I think.