Joe Spork is  mild mannered clockmaker. He wns and runs a shop fixing clockwork devices, from clocks to Victorian dirty toys. He doesn’t make a profit, in fact, he barely scrapes by. But he is determined to be sensible and keep at it, to not be the criminal his father was.

Edie Banister is a little old lady. But don’t her hear you describe her like that. She’d probably agree that what you said was the truth, but she doesn’t like it. She definitely doesn’t like the quite life she is now leading, and she positively hates what the world has become. She was a hero. A spy, a fighter, a saviour of the world, and a secret opperative. But now she thinks that the those she worked for got it wrong. They aren’t the good guys anymore. And so Edie has put things in motion…

A few years ago Nick Harkaway’s Gone-Away World was gaining a lot of buzz. And a lot of promotion. I can understand why, it was a great read. Fun and clever at the same time. 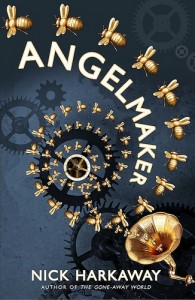 Angelmaker is totally different, and yet totally similar. It is a story of steam-punk trains and submarines, of clockwork bees, of gangsters and spies, of torture and evil masterminds. It is a novel about how we sit back and ignore the everyday evils in our lives because that is the sensible thing to do. About how little the ordinary person can actually do. About how society is fucked. And it is also about family and coming to terms with who you are, about the truth, about love. And about doing the right thing.

It is also a cracker of a story.

I enjoyed it immensely, I love Harkaway’s sense of humour. This is just a fun book, even as it deals with a megalomaniac who wants to destroy the world in order to meet god. Awesome fun. Go read it.