In Zoo City, it's impolite to ask. Morning light the sulpher colour of the mine dumps seeps across Johannesburg's skyline and sears through my window.
–Lauren Beukes - Zoo City - c.2010

Zinzi December finds lost things. That’s her shavi, the gift she received, along with her Sloth, for her crime. No one really knows where the animals come from, or what the Undertow is, but everyone knows that is what is waiting for the animalled. It will swallow you up and drag you down.

Zinzi has been living in Zoo City for quite some time, a recovering addict, she is still paying off her drug debts. And she will take any job she can. But when a client is murdered she gets pulled into a missing persons case. She doesn’t usually do those. No stolen goods, no missing persons, those are her rules. 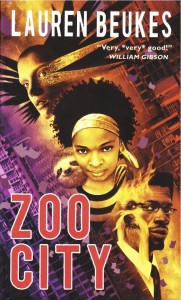 This is the perfect antidote to Gabriel’s Gate, in many ways it is the opposite of that book, whereas Gabriel’s Gate is all about the surface, Zoo City is about what is underneath. Beukes gives her readers enough credit to figure out what is going on in her book. She launches straight into the story and doesn’t bother with overlong descriptions of how things work. Sometimes that can really just fall flat and leave the reader confused and annoyed. In this case Beukes gives us just enough information to keep up.

And then of course there are all the things that this book talks about, racism, prejudice, all that important society stuff. Zinzi is on the outskirts of society, the animalled are the lowest of the low. Their crimes are made visible for all to see and to judge.

There is so much to enjoy about this book. It has great pacing, you certainly won’t be bored while reading it. And I certainly would be delighted to read more in this world. Actually, that is my one complaint, it ended, and I want to know more!

RT @grumpwitch I just dont care about the royals

About a week ago

About a week ago