Part of my RIP VIII reading.

Book 2 in The Raven Cycle

In the first book we learned that Blue Sargent is the only non-psychic in a family full of clairvoyants, although her presence can amplify the gifts of others. She is also doomed, if she kisses her true love he will die. So who is her true love? Is it one of the Raven Boys? Adam, Gansey or Ronan, it can’t be Noah, he is already dead.

And what will the quest for the Glendower reveal? 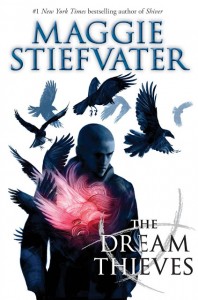 I really wanted to love this book. But it left me feeling exactly the same as the first book, unsatisfied. And I just can’t put my finger on why. I really like Blue as a character. She is so grounded and practical, she isn’t perfect, but she makes realistic and understandable decisions. And I liked the relationship between the boys, and between the boys and Blue, and also between the individual characters finding out who they were. It all feels real, and the book is well written and atmospheric. It just never hooked me, never got up under my skin like The Scorpio Races did. Actually that isn’t totally true, because every now and then some parts of the book would come alive, but then poof, it was gone, and I was back to reading a perfectly adequate and entertaining book. Urgh, that is such a horrible thing to say about a book, utterly damning in a way that I don’t want to. Because I liked this book, I like this series, and I will read the final book in the series when it comes out next year1 . I just wanted more feeling from it, and I didn’t get it.

Although part of the problem may have been that I didn’t reread the first book, and it has been a year so details have definitely escaped my memory. A refresher probably would have helped.

In her review of The Raven Boys Renay mentioned similarities with Susan Cooper’s The Dark is Rising series. At first reading that didn’t quite gel with me, but I’ve just finished a reread of that series so it is fresh in my mind, and after a seconds-worth of thought it makes sense. Both deal contemporary times but also with the whole notion of time and what is happening now affecting the past as well as the other way around, and of course Owain Glynd?r. But also the fact that they revolve around a group of children/teenagers, and that they are both so grounded in the landscape. That was one thing that really stood out in my reread of The Dark is Rising, the descriptions of the Thames region and Wales were so vivid. I’m not quite sure that Stiefvater got quite that same level of vividness across, but she came close in her descriptions of people within their landscape.

Hmmm, talking about The Dream Thieves now makes me think that I actually got a lot more out of the book that I had initially thought :)

Other reviews : Dear Author ; Proud Book Nerd ; let me know if you’ve read it and I’ll add a link