I wasn’t too convinced that I was going to like this book when I first started reading it. The first chapter didn’t grab me and I really wasn’t too enthralled by our narrator. To be honest, I didn’t really like him all that much. But the second book just won a Costa, and this one has plenty of awards to its name too, so I figured I’d give it another chapter or two. And once I got into the story I really was hooked.

The story is told to us by Todd Hewitt, a boy just a month away from turning 13, the birthday that will officially make him a man. He lives in Prentisstown, the last remaining settlement on the New World after the war with the original inhabitants. A town with no women, where he is the youngest. A town where you can hear everyone’s thoughts and feelings, and a world where all animals can talk. Even if they don’t have anything to say.

But then he encounters a silent spot in the “Noise” and suddenly he is on the run from everything he grew up with. And slowly realises that nothing he has been told is true. 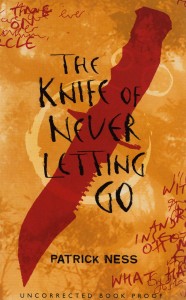 The Knife of Never Letting Go by Patrick Ness

This book is extremely well written. The reader only slowly realises what is going on, oh you have your speculations, but you learn along with Todd. And he himself becomes so much more of a character than the moody young teenager of that opening chapter.

At first I was a little bothered by the style; it is first person and is written to convey a little of how Todd might speak. So we have tho instead of though, and cuz instead of because. But this only annoyed me for a little while. I quickly got so into the book that it merely became part of the story rather than something that leapt out at me every time I spotted it. Plus it does help establish what sort of society Todd comes from, as it makes you think of Huck Finn or Tom Sawyer.

This is a book that works on pretty much every level. And the ending will make you hope you can get your hands on the sequel as soon as possible. It isn’t happy, it isn’t resolved and you must know what happens next. I’ll have to wait til tomorrow when I can nab The Ask and the Answer.

As well as good story it also raises the topic of gender and the roles societies assign people based on whether or not they are men or women. But don’t worry, it isn’t a heavy-handed hitting you over the head look at gender. No preachiness here, thank god.

Other reviews: The Guardian[2] ; Things mean a lot ; Stephanie’s Confessions of a Book-a-holic ; Well-Read Child ; Wands and Worlds ; Save Ophelia ; YA fabulous ; More on technorati

As Patrick Ness has joint American & British citizenship I’ve tagged him as both. He was born in the US.