So, sport is fun isn’t it? It is the taking part that matters, right? 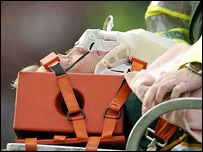 Or maybe not.
The game on Sunday between Ireland and Australia was a disgrace. Fights dominated the first quarter, even before the game started there were brawls on the field.
I couldn’t tell who started what, but it doesn’t really matter does it? The fact is that the officials were never in charge, and never really tried to take control, happy to issue yellow cards when what was called for were reds.

I’ve never been anti the International Rules series, but I’m starting to agree with Mickey Harte that it is a sham and a waste of money, time and resources. There are plenty of international GAA teams out there. Why doesn’t the GAA fund an international match between Ireland and the US if they are looking for an international aspect to the game?

The fact of the matter is that the tackle is something that the Irish players have never gotten used to, taking or giving, instead relying on speed to get them out of trouble. But when you have full-time professionals going up against amateurs there can really only be one winner.

The Aussies did outplay the Irish in terms of skill as well, but no one will remember that, all we’ll remember is the tackles and the fights.

As for the Shinty match, well, we lost that too. But at least there weren’t any fights there, and congrats to Scotland for the win. Sunday was not a good day for Irish sports, cause Munster also lost in the Magners League..

Still, the women won their International series. Although at one stage in the second test they had too many players on the pitch, which meant they were stripped of all 42 points they’d scored until then. They still won, Ireland 3.5.6 (39) – Australia 0.4.6 (18)

I haven’t forgotten about our Unconscious Mutterings either: