Sunday morning dawned with blue skies and a trip to the christening. Then the aftermath and the chatting, the ooohing and awwing over the baby. But as the clock got closer and closer to 3 the boys began to look at their watches. The telly in the kitchen went on. There was a half argument over whether the build up to the match should be shown, or whether B#3 would be allowed to watch some of the Grand Prix. He had a bet on you see.

But at around 2.45, laden down with cheesecakes and sandwiches we all headed for the cars. There were two loads of us, and only a limited number of seats at home, so I told the mother to facking floor[1] it, but she didn’t. Luckily the father was still messing about with his camera so we made it back before the larger car, and nabbed some good seats.

And for all my dithering over what team I was going to support, once the match started there was no doubt. My head may have been wondering, but the rest of me said Munster.

Even before the second car had arrived Munster were three points up, and from there on there was no real doubt about the outcome. The Munster forwards were simply fantastic.

It was billed as a “clash of cultures” in some of the papers, and while that is certainly an exaggeration there was a sense that although these teams know each other so very well, have played together on so many great occasions, have been willing to, as Paul O’Connell put it, die for each other, they were stereotyped as opposites

Leinster versus Munster has been reduced to country against town, Barry’s tea against cafÃ© latte, ale against champagne. Munster are perceived as being about blood and thunder and apocalyptic skies, trundling around rugby fields in one, indistinguishable red mass. Leinster, though, are a bunch of amorous Frenchmen with south Dublin accents pirouetting around the field at 100 miles an hour, all the better to showcase their Byronesque hairdos.

Paul O’Connell, man of the match, man of the tournament. Who doesn’t have a grá for Paul? Brian O’Driscoll may get all the press, but it isn’t the Leinster captain that we all adore. We may respect him, we may think he is the best rugby player Ireland has produced, we may admire him. But he just doesn’t have that place in rugby hearts that O’Connell does. A place cemented not only by his displays on the pitch, but his attitude off. He gave a lovely interview just after the match. 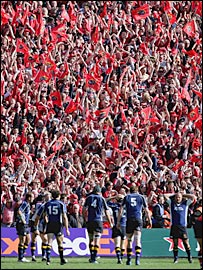 And then there is O’Gara. You’d have to feel some sympathy for Contepomi, his opposite number who made quite a few mistakes, but O’Gara was superb, and none more deserving of scoring that wonderful try. And it was a great sight to see him leap over the hoardings, running straight for the red army faithful.

“If I could turn back the clock, I wouldn’t do it again.” O’Gara reflected on of his soccer like celebration.

“But your emotions get the better of you at times, and, if I can’t enjoy that, I won’t ever enjoy any moment I’ve had. I couldn’t believe there wasn’t a second line, and I was through.

“I could just see a sea of red in front of me and that gave me an incredible buzz.”

Although I’ll confess that when I say him jump I thought to myself, he’s going to tap an ankle and go flying, and then where’ll you be against Biarritz? But he didn’t, and for a fella just out of hospital, with boots that were too small for him, and a cut opening up didn’t he do well :)
And then there’s Stringer. And O’Callaghan. And poor John Kelly who went off injured, replaced by Rob Hernderson, who also had to be carried off injured before the game was over.

So congratulations to Munster. But you’d have to feel for Leinster. After their fantastic display against Toulouse they go and lose the bragging rights for the next year. I’m sure they’ll be back, better than ever for next year’s competition, but for now, has anyone got any spare tickets for Cardiff?

And I just have to end with a comment from George Hook. He was talking just before the match started about how little the Munster coach, Declan Kidney, gives away in press conferences, and said “If you lined 100 Kidneys up, you still wouldn’t reach a conclusion.

Final score in the European Rugby Cup semi-final was Leinster 6, Munster 30. And while Munster did dominate, and boss Leinster around a little, I think that final score is a little flattering to Munster. Which I’m sure they know.