There were geese flying over heard as I went for lunch. A whole giant flock of them, honking away as they migrated. You know what this means….

That’s right, it has faded from the news, with its o-so-catchy name of H5N1, no longer are the scare-mongerers’ mongerings[1] taken seriously. In fact they aren’t even listened to. But I am here to warn you. “Ware the birds! Ware!”

Nothing like a little mindless fear to get the blood pumping.

Be mindful of the threat these feathered creatures embody. Be prepared to deal with the oh-so-deadly threat from the skies. This Avian Peril![2]

Mr. Brain Lesion should so star in a new film. The War of the Birds, okay, that one’s not so good. But still. Imagine the special effects. It’d be like an updated Hitchcock film with a bit of a modern disease-fearing population, and there would be explosions. So many explosions, I mean, think of all the flocks[3] of birds we could blow out of the sky. Plus there’d be the opportunity to have a little kid, you know the type, blonde hair, big blue tear-filled eyes, try to defend his or her pet bird. Wow, echoes of that kid’s film I saw years back where a whole gang of children got together to “save the tiger.” This film would have everything.

Now, who should direct? 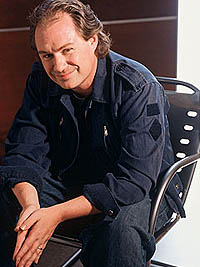 And in other news, is it just me or is John Billingsley (II) just plain creepy. For those of you scratching your heads[4] wondering who he is, he played the doc in Star Trek: Enterprise or should that be plain ole Enterprise? Anyways the reason I bring him up is that he was on Nip/Tuck last night, playing this dude who wanted to get his leg chopped off because god had made him wrong and he was supposed to be an amputee, or some such. I wasn’t really watching I was more entertained by Fitz & co in Assassin’s Quest the book I was reading. But I do remember thinking his character should have turned out to be evil on what little I saw of Enterprise. He just has that air about him.

Also I saw him in an episode of…. hang on, I’ll get the name of this police-show… Cold Case? You know the one, with the pretty blue-eyed blonde[5] police-lady who revisits old cases from the past and usually solves them within an hour cause she is just fabtastic[6]

Whatever, he played an evil killer dude there too. One with mother-issues I believe. Liked to hunt women through the forest or somesuch. But thats all nothing to do with anything. The fact of the matter is that he just has a creepy vibe. I wonder does he know Niall Quinn[7] ? Where was I?
Oh, yes Mr. Creep. he should be in my film too. He’ll be the evil scientist messing with FORCES HE CANNOT POSSIBLY COMPREHEND[8] cause, you just gotta have one of those. Otherwise it is just a nature fights back film, and as The Day After Tomorrow showed, those films are shite.

Hang on a second, I just linked these two unrelated topics together, maybe I should go back and delete that dividing line, but it might mess up the picture. Guess I won’t.