After the collapse, the Seizure, when the world went to hell, a small village in England was chosen to live under the Process. A whole community run by a computer program. It would decide what, and who, was necessary. And of course, who was unnecessary. The Process provides for those it calculates as needed, the others are evicted. James is the bailiff. He is the one who dons the armour and physically evicts members of the community.

All who live under the Process have a connection to the Process, a stripe on their skulls where they received their implant. But James has a deeper connection. His implant is more connected, and when he got it they also removed something. He is the physical enforcer, but he does so under the influence of the Process and its calculations and algorithms. He does not choose to act, he must act.

Ruth loves her husband, but his becoming bailiff has changed him. Of course, the whole world has changed for her and for everyone she knows. She lost everything. And before the Process she learned what it was to be powerless, to be a small woman in a society ruled by “might makes right”. She believes in the Process, although she doesn’t always agree with it. The Process is the only way forward. Isn’t it? 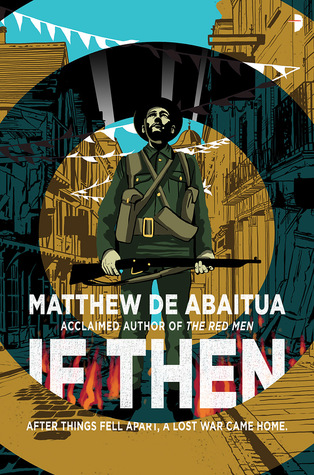 I subscribe to Angry Robots mailing list, usually I just give it a quick skim for authors I already know, but the cover of If Then attracted my attention [ref]I know, don’t judge a book and all, but we all do it. Otherwise all books would have the same sort of cover wouldn’t they[/ref] and the blurb on Net Galley about it sounded interesting

In the near future, after the collapse of society as we know it, one English town survives under the protection of the computer algorithms of the Process, which governs every aspect of their lives. The Process gives and takes; it allocates resources, giving each person exactly what it has calculated they will need. Human life has become totally algorithm-driven, and James, the town bailiff, is charged with making sure the Process’s suggestions are implemented.
But now the Process is making soldiers. It is readying for war — the First World War. Mysteriously, the Process is slowly recreating events that took place over a hundred years ago, and is recruiting the town’s men to fight in an artificial reconstruction of the Dardanelles campaign. James, too, must go fight. And he will discover that the Process has become vastly more sophisticated and terrifying than anyone had believed possible.

And it is a really interesting book. I don’t think it will be to everyone’s taste but if you like science fiction that asks questions about society and humanity and how people relate to one another then I would recommend you give this one a try. I’m not sure if I liked the characters, but after being through the collapse of society maybe we’d all turn a little selfish and pragmatic rather than idealistic.

The World War I aspects to the book are truly horrific, the utter waste of life and how it impacted on those that served as well as the wider society. But the way that efforts to stop war, in all its forms, end up creating even more pointless death and suffering is horrible to contemplate.

As I said, this isn’t a book that will be to everyone’s taste, it is personal and focused on small details, while at the same time addressing the big questions life what does it mean to be human. In a way it is an example of the personal made political, which is something that I really believe. Even if you think this isn’t a book for you, I’d urge you to take a chance on it, it really is a fascinating read.