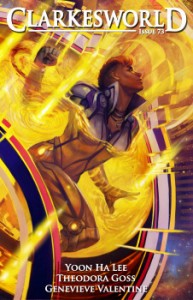 After the War came the Empress in the North. England was preoccupied with recovery. With dealing with rebellion throughout its empire. And the discontented in England were prepared for a change. But the empress brought winter and snow and the need to forever increase the empire, for in a land of perpetual winter where does food come from.

England under the White Witch may be a short story but it covers a lot of ground. It is a story that is being told to the reader, so there is a fair amount of second person pronoun, usually I don’t like that. But in this case it works, because the main protagonist is actually addressing the reader as well as recounting her own story. Of how she was only a child when the Empress came, with winter and wolves and magic. And how she promised so much, and delivered. But there is also the warning.

Yes, the Empress delivered, but she brought more than equality, she brought death and war, informers and betrayal.

It is a very well told story, it has its message. Well, more than one I suppose, but it tells the story first off. And I loved the idea of the Wolf Guard. I’ll have to go look for more by the author.