It is the end of the world as Zoe knows it. A mysterious plague came along, killed almost everyone. A small few survived, but were changed, mutated. Others were immune. But civilisation is gone. It is man eat man out there now as the survivors try to stay alive. Zoe isn’t just crossing the world in some random hope of trying to survive. She is pregnant, and the child’s father is in Greece. Or so she hopes, wishes and believes. She must reach him for any chance of a life. 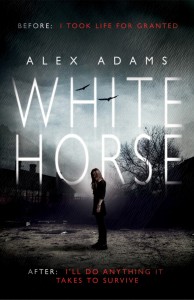 Zoe tells her story in alternate sections, then and now. Then, back before the war and the weather and the plague. Back when life was normal, or as normal as it could get. And now. After the end.

It is an effective structure, letting the reader get to know Zoe and how the world ended.

Trouble is, I just didn’t enjoy this book. Plot elements seemed to swing out of nowhere. Randome things happened because, I felt, the author figured we need a bit of action now, or lets through in some horror. It made very little sense.

But the writing itself, the descriptions and words actually used, they work well. It makes for a very easy to read book. You could probably skim read it and not really notice a lot of flaws, but they just annoyed me. Zoe herself I didn’t like, and everyone existed to serve her story, which is understandable, I mean, this is her tale, but at the same time they felt and read like supporting characters not real people.

And the bad-guy! I’m sorry, but, just no. Didn’t work for me at all. Irritated me no end.

So I didn’t like this one, but I think I would try another by Adams, this is her first one, a certain amount can be forgiven.