In the not so distant, but still far off, future humans have left Earth. Colonised Mars, the Moon, and many asteroids. The Solar System is our home now, we are not limited to just one planet, yet we are still dependent on it. Those who live in the Asteroid Belt know that they are colonies, subject to the demands and whims of another land. Mars is trying to complete its terraforming so that it will be totally independent. But that time has not yet come.

In the belt, they know how fragile life is. And they are well aware of their standing in the pecking order. And they would like to change that. 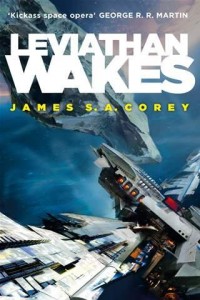 But things are about to change. One small act of piracy may be more than it seems, and one worn-out and weary detective is about to investigate things that powers would like to stay hidden. Aboard a rust-bucket of an ice mining ship an officer is about to lose his ship and most of his crew, and find himself right in the middle of the balance of power in the solar system.

I’m much more of a fantasy person than a science-fiction person. Not because I prefer dragons to spaceships, but because I’m not a huge fan of mathematics and physics in my stories. Luckily enough this isn’t hard sci-fi. It is a detective story mixed up with a war story. It just so happens to be set in space and feature space ships and lasers and that sort of thing. Space opera can be fun.

It is a contrast of two different outlooks. Detective Miller has seen the worst in people. He deals in practicalities and in what must be done. Jim Holden still has hope. He is a righteous man, in the good sense of the word. He sees what should be done, and maybe that doesn’t quite square with the reality, but he is still prepared to try and do the right thing.

It is a great adventure story, with two very different, but still entertaining characters. It is a book that entertains, and keeps you reading. I’m not sure if it is one that will stick with me, I don’t think I *love* any of the characters, but I am interested in seeing what happens next in the story. So I will be on the lookout for book two of the trilogy.