Do I need to give a recap to this story? I mean, you know that it is a Spider-man film, and if I tell you it is an origin story well, I’m sure you’ll figure out that there will be something about his being bitten by a spider, getting super powers and then, after a tragedy, starts down the vigilante route.

Forgive me if I don’t sound all that enthused about the plot of this film. I went into the film wondering what new take this was going to give us. I mean, surely they’d have something new and cool if they are rehashing the Spider-man ‘verse because we just had three films of his journey. Surely if we were going back to the start again there would be something fresh for audiences? 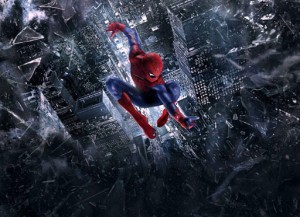 Well, unless you count 3-D as being new and original then, no. Not so much.

Okay, so we had a different villain and a different love interest, but pretty much every theme in this film simply redoes what was in the first Tobey Magire film. And that came out in 2002, only ten years ago. I know, I’m repeating myself here, but I really don’t get why the film makers needed another origin story. They shoulda just replaced the actor and kept on going. Because not only was this a do-over, it was a poorly done do over.

The writing was simply abysmal. Nothing flowed or felt in the slightest bit natural. Everything was shoe-horned in. It was dramatic and emotional because that is what is needed in this scene or section, not because it made sense in the story, or even for the characters. Which is a huge pity, because I think that Garfield and Stone did a great job. I really liked them. But the storylines they were forced into? What was that all about.

First off, that bully, Flash!? Come on, the most stereotypical jock-esque character in the world. A bully because Peter Parker needs to be bullied, and then Show Spoiler ▼

suddenly he isn’t a bully. He empathises with Parker’s loss. WTF! You can’t just have a character switch like that, not without some background.

It was just plain lazy writing.

This whole film was lazy though.

Right, good points…. as I said I liked the two main actors, and the action was fine. It did suffer from the usual 3-D means the screen is too dark issue, but that’s an issue with 3-D itself so I’ll give it a pass. And I’m not even going to go into the damsel in distress aspect. Well, not very much, suffice to say that I think that whole “protect the girl by taking away her choice” is horrible, and, okay, it was her father so he has some excuse for being overly protective, but still. Its just lazy writing. Yeah, I’ll stop here, cause you can tell that I didn’t really like this film. And the more I think about it, the more I don’t like it.