Cassandra Mortmain’s father is a famous writer; unfortunatley he has been suffering from writer’s block for years. Her mother is dead, but she has a lovely stepmother now in Topaz. She also has a younger brother Thomas, and and older sister, Rose. And then there is Stephen, who has grown up with them, not forgetting the dog Heloise and the cat Abelard. They live in a ruin of a castle in England, and have no income. Which means no money for clothes, repairs, rent, or food. They have sold everything worth selling. And then the two Cotton brothers arrive on the scene. 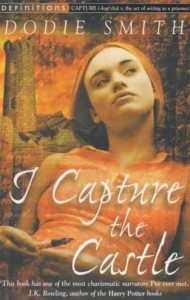 I capture the castle by Dodie Smith

I loved the first half of this book. It is wonderfully written, and I though that Cassandra was a brilliant narrator. I loved her humour and her honesty. Her desciptions of the castle and its inhabitants are fascinating and I could easily have read it all night.

But I don’t really know what happened, I just fell out of love with it in the second half of the book. Something, and I can’t quite put my finger on it, made me dislike Cassandra a fraction. And I just didn’t enjoy the romance aspect of it. Which is a huge pity because I was enjoying it so much, right up until I just wasn’t.

I don’t know if it was that I was reading it in short sittings and so couldn’t get totally caught up in the story and the world of the Mortmains. I just found myself thinking that the family were just too irritating all of a sudden.

But I did enjoy it so much at the start that I think it is one I may try again at some stage.