As you may remember, last year I came across a series of books by Patrick Ness, The Chaos Walking trilogy. Which I loved. They even made me cry they were so good. And when I spotted that he was going to write a book based on an idea by Siobhan Dowd[1] I thought, oh, that sounds fascinating. And then I saw the cover, and thought “ooooohhh that looks veeeery interesting”.

Yesterday he came to Dublin, so I took a day off work and headed up to see him in Easons. 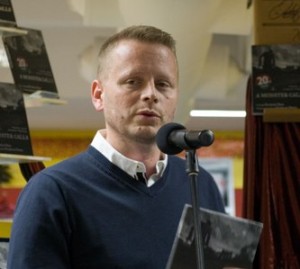 He was “in conversation” with Sarah Webb, an Irish author I’ve never read. I think she does more chick-litty stuff than I usually read, but I may give her a go at some point. Always try new things, that one of my mottoes[2] If I had mottoes.[3]

Anyways.
Mr. Ness was just brilliant. He was entertaining and chatty. And sounded like he really loved his job. Which, well, you would. But also smart and intelligent. I especially liked his response to the people in the audience who asked why certain bad things had to happen. If you’ve read The Knife of Never Letting Go then you’ll know exactly what I’m talking about. And if you haven’t, well go read it. His response was that it was probably the way that that particular character would have chosen. Heroic and all. But also, that sometimes in life bad things happen, and to say they don’t, or pretend they don’t is just a lie. And lying usually makes dealing with the bad things in life even harder.

If you have the chance to see him in person I would recommend you go. Now I’m off to read my A Monster Calls