Edited to add
Okay, so it turns out that Mr. Pellegrino is a more controversial author than I realised. His PhD may not in fact be real, his scientific claims may be incorrect. But I don’t know enough about Ancient Rome to ask the proper questions of his book…
Still, if you do read it, bear in mind that other people think he has gotten a lot of things wrong: Tess Gerritson on the myth of the author ; David Brennan on Fraud. This is what I get for doing research about an interesting book after I read it. 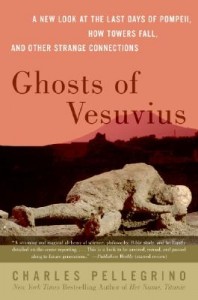 I have seen it called a Metalogue and I have to agree with that definition, a text or conversation in which the form resembles the content.

I’m not sure what I expected of this book. I picked up based on the recommendation of someone or other on a library-related work “how to” forum. The cover made me assume it was about Pompeii. But then I read “a new look at the last days of Pompeii, how towers fall, and other strange connections” and I figured that the best thing to do was just start reading and hope it was entertaining.

Well, I’m not sure if entertaining is the right word. When talking about disasters on such a huge scale it seems wrong somehow to describe a book as entertaining. But it was certainly informative. It is a narrative history, with science and religion and philosophy all mixed in there as well. It is extremely well-written, but it has a style all of its own. In a way it is sort of stream of consciousness. And on occasions it is slightly repetitive, but that is a deliberate decision, or at least, that is how it comes across. Some readers might say it rambles all over the place, and it does, but at the same time it has a very important message at its heart. We have very little control over our lives, over the world, and for all our scientific achievement and progress, we are still dependent on the earth’s stability and that cannot be guaranteed, because, over the long-haul the earth is not static. It is a constantly changing, constantly shifting entity.

It is a personal account as well, and for that reason I cannot be too critical of what I found was too much time spent covering individual tales of survival at the World Trade Centre attacks. Some of it was incredibly well told and moving, but reading one story after another in such a manner made these extraordinary events somehow mundane, in my opinion.