Bon Agornin writhed on his deathbed, his wings beating as if he would fly to his new life in his old body.

Bon Agornin has led a successful life in many ways. He has improved his status, and his elder children are well on their way in life. But his three youngest need additional help. The two younger daughters need dowries if they are to marry well, and his youngest son needs in the city. And so Bon Agornin has decided that his wealth is to go to them, with the rest of his family merely taking a token, for remembrance and tradition. And by his wealth he means his treasure and his body, for in dragon society it is practice to eat the dead. But his son-in-law does not agree, believing that Bon Agornin meant only his gold. He and his family take much much more of the dead dragon’s body than one token bite. 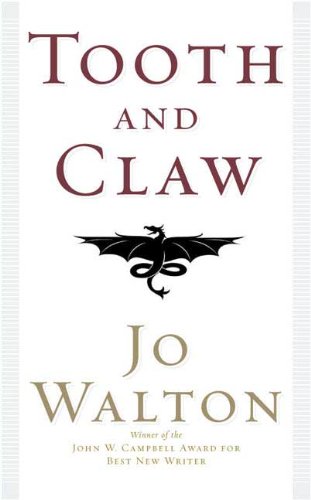 IThere is almost too much to talk about in this novel. First of all, there is of course the fact that the main characters are dragons, in a strange alternate Victorian world. In a lesser author this could have led to a story that could have been told with humans as the main characters apart from the fact that dragons meant an added hook. Walton is better than that. She has created a society that is Victorian in many ways, but is still essentially different and other enough that it benefits from the oddness of these civilised dragons and their stratified society.

They are also different enough to fully play upon some of the standards of Victorian England. Especially in regard to women. Female dragons, you see, are born gold. But once they have been touched by a male dragon they blush pink, and after motherhood they are ruby red. This of course means that it can instantly be seen if a young female dragon is “fallen woman” or a pure virgin.

Walton also wonderfully expands on the notion of the poor staying poor while the rich get richer, for in dragon society only the gently born are entitled to eat dragonflesh. And without eating this no dragon will grow beyond seven feet. The lower classes are thus condemned to servitude, while the “nobly-born” eat not only their parents, but also any of the lower classes they deem unfit to live. If a farmer has too many hatchlings, for example, the lord may come and ease his burden by devouring one or two. All to ensure the continuing strength of the dragon race you understand!

And it is told in a matter of fact, dry, humourous tone. With the author occasionally addressing the reader directly on occasion. So don’t worry about too much preaching, there is, in fact none. Sure the book raises points about gender roles, dangers of childbirth, classism, and religion, but it is all told to serve the story so it all fits in. Nothing feels shoehorned in because the author wanted to promote some ideology.

Also, who doesn’t love dragons and a comedy of social manners :)