IMDb has this classified as a Drama and a Comedy. I’m not sure I see either. I know I didn’t enjoy it, so that rules it out as a comedy. I suppose, technically it is a work designed to be performed by actors so it qualifies as drama, but if it were up to me this would be firmly placed within the “angsty whiny shite were nothing happens” genre.

The story, such as it is, revolves around Roger Greenberg. He is just out of an “insane asylum” for some unspecified reason, and has come back to L.A. in order to “do nothing”. He moves into his brother’s house while he and the family are holidaying in Vietnam, looking after their dog and building a dog house. There he meets their personal assistant, and begins to have some sort of something with her. 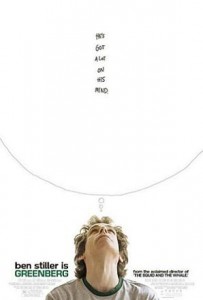 But really what the film is about is the character of Greenberg being an ass-hole, whining about how no one gets him, being rude, boring, whiny and narcissistic. And for some reason the audience is supposed to care about him? I don’t think so. And I fail completely and utterly to see why Florence likes him. Okay, so he’s “vulnerable” that’s not even a quarter of a good enough reason for letting him into your life.

Of course she isn’t much more than a cipher if you ask me. She is only there to provide someone for Greenberg to react to. Everything is about Greenberg, and by extension, everything in this film sucked. I was bored for most of it. Annoyed for other bits. The major plus, the dog was lovely, but even then I didn’t care if it lived or died. And I love dogs! Nothing about this film engaged me. Basically I hated it.

And all the more so because it was the surprise film at this year’s JDIFF so there was a level of “ooohh I wonder what this is going to be”. As soon as the opening credits began to roll there was a groan in the audience. I tried to give it a go, because I have liked some films with this sort of a style, Garden State or Sideways for example. But, I need either a likeable or hatable character. Just something to feel about. And annoying doesn’t work! The ass-holeness of Greenberg annoyed me, why the hell was I supposed to care about him? And his yearning for a different life, his total selfishness in how he dealt with everyone and everything. Yeargh!

Maybe if it had focused more on Florence I could have enjoyed this film more. But she was such a passive character that you just wanted to slap her, so maybe not.

A big old thumbs down from me.

Other reviews: The auteurs ; Screenwriter