The marketing and hype around Solo: a star wars story is remarkable for its absence. I barely saw a trailer for it. Spotted very few posters, if any, outside the cinema. And the excitement levels around it were totally non-existent as far as I could see. Was anyone hyped for its release?

Don’t you find that lack of engagement surprising? This is a Star Wars film after all. And one telling the story of Han Solo!

I know there were shooting issues and directors replaced and all that, but still… very odd. 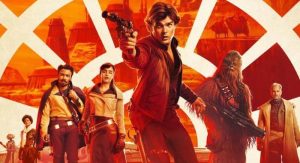 I have to say that I enjoyed the film. I mean it is no Rogue One, which I loved. But it is no Last Jedi either.1 I was entertained throughout, enjoyed the action and the hi-jinks.

Character-wise it was fine. Nothing great, but it did the job. And actually that is probably the problem with the film as a whole, it is fine. Does the job, but nothing really sparkles in it.