Set in Kabul under the rule of the Taliban The Breadwinner is the story of a family trapped by the law. The father has been sent to prison, leaving his wife, two daughters and infant son with no way of getting food or water, for no woman is allowed outside without a male relative. Not even to fetch water from the well.

Parvana decides that she must do something so she cuts her hair and dresses up as a boy. That will give her the freedom to go to the market, to bring back food and water. And maybe even raise enough money for a bribe and free her father.

But Kabul is a city full of fear, violence, and death. Her mother has already been beaten for being outside, there are risks everywhere. And yet, passing for a boy Parvana is free in a way that she hasn’t been before. 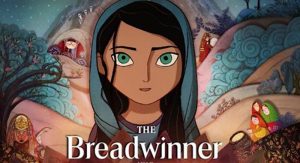 If that subject matter makes you think that this is a misery-porn film, then think again. Because it is told from Parvana’s point of view it manages to avoid a lot of the horror, while still acknowledging that aspect of life. Violence and danger and there, and real, but we see it all through an eleven year old’s view and somehow that manages to both make it better and worse.

Parvana’s story is also intercut with the tale she begins to tell her baby brother, the story of a boy who sets out to save his village from an evil demon elephant. Both stories are animated beautifully but in very different styles, making it even more of a cut away from the real violence of Afghanistan.

I would highly recommend this film. It is full of sadness, of course, given the subject matter, but also full of hope and bravery, and the feeling that things can get better and even in the midst of evil there are people trying to do the right thing and help others out.