I’m afraid to say that I am one of the people who were disappointed by The Last Jedi. The one word description I can give of it is “mess”. That’s pretty much the first comment I made about it, and that is still my verdict after a few days. I’m so disappointed! 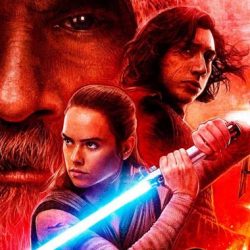 And all the more so because there is so much that I should have loved in this film. Rey’s origin, her parents. Loved that. I’m always up for Show Spoiler ▼

ignoring bloodlines. Especially when these so called awesome blood lines only go back one/two generations

I loved the interactions between her and Luke, between her and Kylo Ren. But the film undercut itself somehow, and made me less invested in their story than I should have been.

Part of me thinks that the reason I was so underwhelmed is because it is so much easier to set up an intriguing storyline/mystery than it is to reveal things. Answers are very rarely as satisfying as you’d think. So The Force Awakens got to do all the fun hinting and setup, where as Last Jedi had to provide answers. Always a tricky job.
And maybe that is part of the reason, but I think a bigger part is that it was too long and saggy and for so much of the film I was wondering what the point was. And also the humour did not work. I’m not saying I didn’t find it funny, I just mean that it one-liners and jokes ruined the emotion of scenes for me. And was that milking scene there for any reason?

I’ve been skimming other people’s reviews and thoughts and I am so not on board with the so-called-fan-boys who think that the the legacy of Star Wars has been damaged, because I thought that the central theme of the film was a great one. People make mistakes. Doesn’t matter if they are jedi masters or pilots. Mistakes get made. That’s part of life, it is what you learn from those mistakes that is the important thing. You know, as Rocky said, It’s about how hard you can get hit1 and keep moving forward; how much you can take and keep moving forward. That’s a much better storyline than look hey, this guy comes from an important family, he must be important too.

And I really appreciated that there were plenty of women and POC in the rebellion this time around. I liked the Rose character, but that whole sub-story annoyed me so much. It was so pointless and just what!?! I mean, I get the message the film was trying to get across, and it is an important one. But, it just felt like a side-quest to me. I was so uninvolved and uninvested in that find the code-master segment.

I did like the pay-off from it Show Spoiler ▼

but as a film plot it didn’t work for me.

It is so strange, because there are so many elements to The Last Jedi that should have had me loving this film. I should be squeeing over those horse-type thingies, but nope. Their faces were weirdly human, the plot didn’t make sense, wouldn’t the security forces have just shot them to hell and back? And those kids who helped would have had the shit beaten out of them. I should’ve loved the crystal fox things.

So many should haves and missed moments.

I’m disappointed. But really glad that other people are loving it. Maybe if I rewatch it my opinion will change? I’m a bit worried that all my problems will grow even bigger though.