Set thirty years after the first Blade Runner, this film is not set in our future, but in an alternate future. One that is bleak and brutal and offers very little hope. At least that is the situation on earth. All those who could have left earth and gone Off-World, leaving the rest behind to live out their days on a dying planet. Replicants still exist, but they have been improved and developed. Now they must obey. It is part of their programming. And some of them make their living by hunting down illegal or rogue replicants, previous models that need to be retired. One of these Blade Runners is K, the main antagonist of the film.

But in the course of his job K uncovers something that makes him question his own self, his role in society, and the role of replicants entirely. 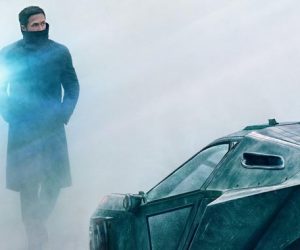 Okay, that’s enough plot. To be honest I don’t think hearing the blurb will make you want to go see this film or not. And unfortunately it doesn’t seem to be doing to well at the box office. Course the first film wasn’t a runaway success either was it? Personally I think this is the better film.

In many ways it feels very similar to the first. It is slow, it is visually stunning. It is told from a male POV, and there are no female POV characters. Female characters in general are thin on the ground, they are there a eye candy, as fridged motivation. This is a man’s story, even when that man is really a replicant. And I really would have loved some more exploration of the gender politics, why weren’t there male sex replicants advertised just like the female ones? But then again, this is following on from a society that was imagined in the 1980s1 and which seemed to view women as sex objects first and characters, well, not even a distant second. So from that perspective it stands to reason that this society, only thirty years removed from that, and a decaying dystopian society of the left-behinds and the discarded may not have grown in that regard, even if we2 hopefully has improved somewhat.

But despite those issues I still really really enjoyed this film. Yes it was slow, which at times I didn’t like, but at the same time I’m conflicted, because I really liked the way it built so slowly and let you appreciate all the beauty on screen.

Because visually this is just wonderful.

Overall I really loved it, but I can also see why people might hate it. I though that Gosling was wonderful as K, his quiet resignation to his fate at first. His interactions with Joi, and Joi herself was such an interesting concept. She was the real heart of the “what makes somebody human” question in this film. I think that Blade Runner 2049 certainly believes that replicants are as deserving of life as humanity, if not more so, but the question now becomes where exactly does programming become personality. Does Joi act as she does because she is programmed to do so? Or has she evolved to become more than just code?

Also I can’t stop without mentioning Luv. Because I just adored her character, she is forced to obey although clearly, at certain points, she doesn’t want to. But she yearns for approval and love from her creator, which she is never going to get. Wallace doesn’t see the replicants as anything more than a means to domination and power. I get the impression that he feels the same about the rest of humanity though.

So yeah, I actually enjoyed this film a lot more than initially thought, and I’ll certainly watch it again. I think that it will reward a rewatch.