Another rewatch, another bump in the ratings, this one goes from 9 up to 10. It still has the exact same flaws, but I just love this film. It has all the feels. I love it so much.

The opening scenes of Warrior feature The National’s Start a war and a character listening to Moby Dick. Not what you may expect when going to see a film about mixed martial arts fighters beating the crap out of one another. Nick Nolte plays Paddy Conlon, an old man now, sober for almost 1,000 days when the film begins, but he was a mean drunk. So when he arrives home one evening to see one of his sons sitting on his doorstep he is a little surprised. Tommy isn’t there is chat or make-up though. He is mean and miserable and isn’t about to forgive his father his past crimes. But he wants a trainer. He wants to fight in the upcoming Sparta competition and win that 5 million dollar payout. 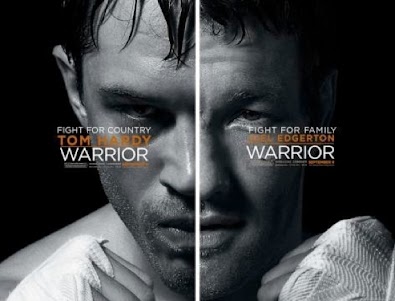 Tommy isn’t the only one with a grudge, Paddy’s other son, Brendan seems to have moved on from the past. He has a wife and children now. And he seems to be doing okay, a nice house and a job at a school as a physics teacher. But past medical emergencies mean he has refinanced his home too many times. And there is a recession going on you know. The bank is threatening to foreclose.

Brendan moonlights as a bouncer. His wife also works. But the three jobs are not enough to keep the house, so when he spots an advert for a fight in a parking lot with the opportunity to make a month’s salary in just a few hours he leaps at the chance. He has experience in the ring, he used to be a UFC fighter. Until he ended up in the hospital and his wife said enough was enough. And most of these fighters, they don’t know what they are doing, they’ve just watched too much telly and think they are hard. So Brendan wins. But this then lands him in deeper hot water as the school’s superintendent pays a visit to ask about the rumours of a teacher fighting. While his case is investigated he is suspended. Without pay.

His solution, to meet up with a old buddy and start to train properly so he can continue to fight and earn some money.

And surprise surprise, both brother end up in the same competition! Colour me shocked.[1]

I liked this film. I liked this film a lot. Which isn’t to say it doesn’t have problems. Female roles being the most obvious. The only actual role is Tess Conlon, wife and mother. And she is forced into being the naysayer, she doesn’t want her husband hurt, doesn’t want him seriously injured because apart from the injury that’ll mean more money in bills they can’t pay. And the fact that Brendan goes and makes these decisions without even consulting her? How would he feel if she went off and prostituted herself for the money, I wonder.

And there were some scenes that made very little sense. After Brendan’s first fight results in the trouble with the school we have a scene where he is at home with the kids and Tess comes in to tell him what the school decided. I’m sorry, what not? Why wasn’t he at the meeting or whatever. Why was she sent? Wouldn’t Brendan have gone to give his take on it? Didn’t make sense to me.

But if we wave those issues aside this is a really good film. A family drama more than a sport film though. Nolte plays the old alcoholic to perfection, and while you really do feel sorry for him as both his sons want nothing to do with him you really can’t blame them. It isn’t easy to forgive and forget domestic abuse, nor should it be. And the film raises an interesting question, should people forgive? Should that abusive alcoholic be forgiven? Or is his trying to make amends just a way for him to feel better about himself.

And Hardy… well, Hardy is just damn terrifying. And yet he has that hint of vulnerability to his character that means you can almost excuse his asshole behaviour. I say almost, but really, I was looking for excuses for his character. Especially during Show Spoiler ▼

the final rounds against Brendan. You can see him hurting and yet it is almost as though he can’t give in. Not until he is totally and utterly forced to. He just has to keep on fighting, it is the only thing he knows.

Also his physique is scary. Mutant shoulders and everything. Anyone worried about his ability to play Bane in Batman really need not. He is scary scary scary. Did I mention he is quite scary looking?

This isn’t a film that says anything new or original. It is a fight film, with family drama thrown in. And yet, for some reason, it just really worked for me. Others might find it a bit cliched in parts, and I can’t really argue with that, but at the same time, it is well told, well acted, and has heart. What more can you ask for. For what it is, this is a really great film.