In the far north west are islands where the sea and land melt into each other in a fretwork of rocks and water.
–Nicola Davies - The Selkie's mate - c.2017

That traditional selkie story, where the fisherman finds a selkie, hides the skin and gains a wife have always been a bit ick. I mean, its a rape story, sanitised to make it somewhat palatable. But there have been retellings, an attempt to get another view point out there, Margo Lanagan’s The Brides of Rollrock Island for one excellent version. 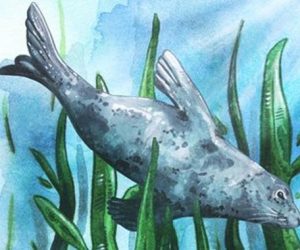 This reinterpretation is very different from that one. It is aimed at a much younger audience for a start. It is a step up from picture books, maybe a few steps up in subject matter. Certainly it is aimed at children, but it should work for most adults as well.

It tells the story of a man who loves the sea, who loves to sing, and who one day meets a selkie woman. She gives him her skin, making a bargain that she will stay with him but if she asks he must return the skin. The have many many happy years. But of course she asks for the skin back. And he replies “tomorrow”.

It is a lovely story, as deep as you want to it to be. A story about freedom and how love isn’t love if you force the other person to do or be something that they aren’t.

And the illustrations are gorgeous. I must read more in the series by Davies, they are described as “tales that explore the deeper, darker side of our connection with the natural world.” and this one fits that description.

@ErisLovesMovies Just watch out for mist, but yeah that sounds fine. Just fine

@ErisLovesMovies Probably not, but I might. Looks pretty cool