I have vague recollections of seeing the tv adaptation that was made of this book years ago. And even vaguer of reading the actual book. I went through a Stephen King phase in my late teens I think, but I haven’t read much of his stuff since then. I don’t know if my memories are from the book or the show, but either way they are vague1 and didn’t interfere at all with my viewing of this film. 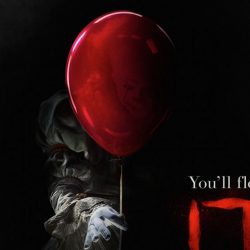 I enjoyed it. Quite a lot, in fact. But I had my usual problem with horror films, it should have been scarier. My experience with horror films is that I usually want to see them and don’t want to see them at the same time. I always imagine that it’ll be too scary in the cinema and make me uneasy out in the deep dark countryside when I get home, with no peoples and no lights and strange sounds… but then I go watch them and, yeah okay, there are a couple of moments but rarely is there anything that lingers.2 And I felt that even more so with It. It was a little creepy in places, and certainly unsettling in others. But, I dunno, it was never really scary. The worst parts, in my opinion, were the bullying scenes.

Maybe it is similar to how an audience will happily watch people getting shot to bits without a wince, but have them stub a toe and we’re all feeling it. The bullying scenes felt real, the terrifying clown scenes just weren’t terrifying because they were so unreal.

It was still a good solid bit of entertainment, and I’ll go see the second part when that comes out. But I am a bit disappointed that this is the film that had my local cinema sold out and packed to the rafters when Detroit had a much smaller audience. And really, if you think about it, Detroit is the more horrifying story.