On the day of her fifth wedding anniversary Amy Dunne disappears. Her husband Nick gets home, a neighbour has spotted their cat wandering outside, to find the door open, the coffee table smashed, and no sign of his wife. We already know that their marriage is not a good one, he has been moaning to his sister at the bar they own about Amy. Nick’s sister, Margo, is not a fan of Amy. And Nick doesn’t seem to be either. But does that mean he murdered her?

The more the police investigate the more likely that seems. Nick doesn’t know who Amy’s friends were. He doesn’t know what she did all day. And her best friend certainly isn’t a fan of Nick’s.

And as the media campaign to “find Amy” builds momentum it seems as though Nick is making all the wrong moves. 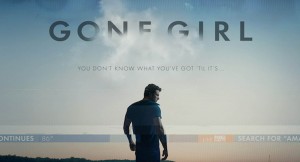 This is a film that I am so conflicted over. At times while watching it I was so angry at it. But then I enjoyed parts of it. I can admire the way it was made and the performances were excellent. The whole tone of the film is great. But I still don’t know how I feel about it as a film.

First of all, neither Nick nor Amy are nice people. This is not a spoiler, but the rest of this review might have some so I’ll hide it, just to be safe.

Nick is a dick. A lazy, self-obsessed cheating no good dick. He is the sort of person who losses his job and then spends all day playing video games, not cleaning up his own mess and spending his wife’s money. Oh, and having an affair with a student. Just because she isn’t under age doesn’t mean that isn’t a world of ick.

But while he deserves some comeuppance for his behaviour he doesn’t deserve to be framed for murder. And that is exactly what Amy is doing. She has planned in great detail a way to get her husband executed for her murder. She even contemplates killing herself to make her story stick. And then when her back story is revealed! She’s utterly callous, uncaring, manipulative, and a murderer. And that is where I had huge problems with the film.

It isn’t that I don’t believe that there are people out there who might think like that1 it is that this storyline, the woman with the fake rape accusation is such a part of popular culture despite the fact that a false rape accusation is very very rare. This whole film plays the “crazy bitch” card a lot. And Amy is a crazy bitch by any standard. In her past she has arranged matters very carefully so that an ex-boyfriend was convicted of rape. Now she has set up, not only Nick, but her so-called friend so that it appears that Nick is an abusive husband who has finally snaped and murdered her.

And that arranging of matters was part of what made me so angry. It is the whole “don’t believe the woman” message that is very prevalent in society. All those who believe Amy are made out to be credulous fools, manipulated by Amy, all part of her plan.

But can I judge the film on that? I don’t know. It certainly had an impact on my viewing of it.

But there is also an argument to be made for the reverse, that Gone Girl by portraying Nick in such a negative manner is in fact a feminist film. Nick, after all, is an utter dick, who, through his actions, has proven to be utterly untrustworthy. Part of the viewer probably thinks that yeah, Amy should be out of that marriage, and Nick deserves to suffer. Although probably not to the extent that Amy thinks.

Leaving aside that part of my conflicted viewing the question is, did I like the film? Well, I’d certainly have no objection to watching it again, and it certainly held my attention throughout. So yes, I guess I did.