Before Ernest Hemmingway was the famous author of hie time he was a struggling writer, trying to figure out how to make ends meet, trying to find his voice. In the 1920s he meets Hadley Richardson in Chicago and after a whirlwind, and often long-distance, romance they marry and move to Paris. Paris is the city to be in for the new emerging modernist writers, from Joyce to Stein, anyone who is anyone spends a considerable amount of time in Paris. There, Ernest is convinced, he can find his voice and write. Hadley is content to go wherever Ernest will be happy, she will support and look after him through all his struggles. 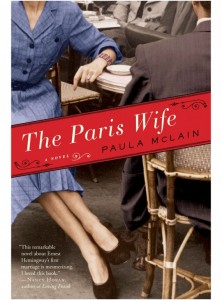 The Paris Wife by Paula McLain

I don’t think I’ve ever read anything by Ernest Hemmingway, all I know about him before this book was that he was a big-game hunter, into bullfights and drinking. That he was a typical “white macho author”, or a bit of an asshole. Well, this book certainly confirmed that impression. He was utterly unlikeable. I’m not saying that I didn’t feel some sympathy for him, all he went through in the war, and he obviously had some depression issues, but you know what, so what. He was utterly horrible to Hadley, even when he was supposed to be utterly in love with her.

And Hadley herself, good lord she was such a weak character throughout the book. I just couldn’t like her, by the end she had grown a little, but that was almost after the story told in the book. Throughout the novel she was a drip. I didn’t get why Ernest loved her. And I certainly didn’t understand why she loved him.

The overall opinion I formed about Hemmingway through this book is that he was a weak and insecure individual who made himself feel like a big man by insulting everyone around him and putting them down.

The book did succeed, however, in making more curious about Hemmingway himself, and I could even see myself trying to read one of his books at some point. I do recall picking up The sun also rises at some point1 but I think I was 13 or 14. I didn’t make it past the first chapter.

I’m not sure I would have stuck with this one if it wasn’t a book club read. It redeemed itself a little in the final chapter or so, but not enough for me to say I enjoyed the book at all. I’m sure McLain did plenty of research but I think that comes across more than the story, and for me, when I’m reading a fictional story I want to be able to empathise with at least one of the characters, even if I disagree with them. Here I was just annoyed and frustrated by the pair.

Other reviews : Popcorn reads ; An adventure in reading ; A book a week ; A Novel Reading