Little Hawk is about to leave his family and village to go into the woods and live alone for three months, a ritual that will see him in his way to manhood. But life if changing for his tribe, and for all Native Americans. The European settlement of America is well under way and with it the whole continent is about to be utterly altered. His is the first part of this story.

The second part of the story revolves around John Wakely, a young boy who is one of the English colonisers. His father dies when a tree falls on him and soon his mother remarries. He and his step-father do not get on so he leaves his village to become an apprentice cooper. 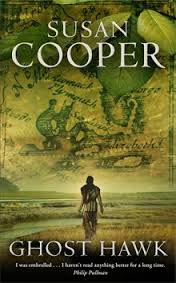 In her author’s note at the end of the book Cooper says that this is not a work of historical fiction but is rather a fantasy story in an historical setting. And as such I really enjoyed the book. It is lovingly told, with so many details and touches that add so much to the bare story. There such a sad, melancholy feel to the book. The modern reader is, of course, aware that the Native American way of life will be utterly destroyed, that so many will be shot, murdered, displaced and treated as though they were not human by the settlers.

And I think that Cooper does a great job at getting across that fact, those atrocities happened, they are the origins of the modern United States of America.

I also thought that Show Spoiler ▼

her killing off of Little Hawk was a brave and wonderful bit of storytelling. I was sure that there was going to be something to save him last minute, that he would be rescued by the white man’s medicine or some such. His death was shocking, yes, but it also made the book feel more realistic. I do see that it could be read as highly problematical though, the Native American dies and remains only to tell the white man’s story. A political or symbolic argument could be made that it prioritises the story of John to the detriment of Little Hawk. I’m not sure I agree with that argument, I’d be more inclined to say that that act reflects more honestly what actually happened. That the Native Americans were killed to allow the European settlers to take their space.

There are some problems with Cooper’s depictions of Native Americans. They seemed very generic and stereotypical “good indian”1 perhaps she could have done more to represent the realities of the Wampanoag way of life. And if she had described this book as a work of solidly historical fiction I might have been a little harsher on that. The fact that she seems to recognise her lack of knowledge2 and calls this a fantasy book gives her a little leeway.

I really liked how she showed the hypocrisy of the Pilgrim settlers. So many fled England and Europe because they claimed they wanted the freedom to worship in their own manner, yet the first thing they seemed to set about doing was persecute anyone else who was different. Not only the “savages” but other settlers who differed in their shade of Christianity.

Other reviews : A dream of books ; Shepline ; The Guardian

American Indians in Childrens Literature points out many of the problematical issues in this book. I don’t agree with them all, but I’m not a Native American so I’m not about to discount them.