The telegram in my hand read: RUSSELL NEED YOU IN DEVONSHIRE. IF FREE TAKE EARLIEST TRAIN CORYTON. IF NOT FREE COME ANYWAY. BRING COMPASS. HOLMES To say I was irritated would be an understatement.
–Laurie R. King - The Moor - c.2002 - pg. 3

If you’ve read my reviews of the other books in this series you’ll already know that I really love them. If you haven’t here’s a quick recap; Sherlock Holmes, a real historical figure retired to Sussex in order to tend to his bees. While there he met Mary Russell; a somewhat moody, if quite brilliant, teenager and took her under his wing. She became his apprentice and later his wife. Errr, spoiler alert! In this, the fourth in the series, Sherlock sends Russell a telegram summoning her to Dartmoor and the moor that was the setting for The Hound of the Baskervilles. There are reports of another ghostly beast roaming the countryside and an old friend of Holmes would like him to investigate. Especially when a man is found dead on the moor. 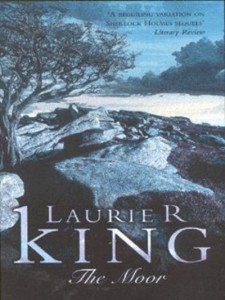 The Moor by Laurie R King

The mystery plays a much larger role in this book than it has in the others I’ve read. But for the most part what I loved about them I loved about this. Russell, as our narrator, is a great character. Full of her own weaknesses and faults, but also with so many strengths that she is easily Holmes’ equal. She provides a much different interpretation of the detective that Watson did.

The friend who calls Holmes for assistance is the real life Rev. Sabine Baring-Gould.[1] Gould sounds like quite a character, and comes across as such in the novel. He and Russell don’t quite get along at their first meeting, but they soon come to appreciate one another.

As with the other books in this series Russell has a lot of trouble with the sexism of her age. But it never overwhelms the book, as I think I said before, there is no preachiness here. I suppose you could argue that Russell isn’t really a product of her time, but it was a time of great change in gender roles and politics. Besides, I really enjoy her so I’m not about to complain.

Other reviews: So what are you reading? ; Read_warbler ; the orange chair ; Age 30+…