Part of my RIP VIII reading.

Oliver is visiting his old Oxford tutor when Theo begins to tell him a story. It is a cold January night, perfect for huddling round the fire and telling a ghostly atmospheric story. But Theo’s story is not just a ghost story to him, it is the history of a picture that hangs in his office. A picture that has always exerted a special influence on him. The scene depicted is not one that Theo usually appreciates. A carnival gathering in Venice, with many masked figures.

typical of those whose scenes are lit by flares and torches which throw an uncanny glow here and there, illuminating face and patches of bright clothing and the silver ripples on the water, leaving other parts in deep shadow.

As the story unfolds we learn that the portrait seems to exert a strange force on almost everyone whose path it crosses. And different narrators enter to describe their experiences with the painting. 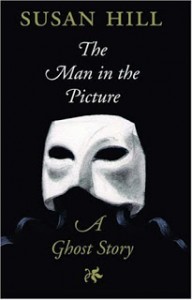 The Man in the Picture by Susan Hill

I really like Hill’s ghost stories. Even the designs of the books make it feel like something special. Hill has a fantastic manner of telling an atmospheric tale.

Unfortunately this one is not one of her best. The central story is wonderfully creepy but it just leaves a little too much unsaid. I suppose in a way the story in the book matches that earlier description of the painting. Some aspects are lit and clear, others are hidden and obscure.

If you haven’t read a Hill I wouldn’t start with this one; The Woman in Black is an obvious part to start, but I really liked The Small Hand as well.