Based on the true story. Or so they say.

In the 1970s Roger and Carolyn Perron move into a new home with their five daughters. It’s a little run down, needs a bit of work, but its home. But the dog won’t come in to the house, and their very first night their results in horrible smells that fade in the morning, and complaints of the cold. And the dog, that had been chained up outside, well, alas, poor Sadie is no more1. And things only get worse from there.

April the youngest starts talking to a boy who isn’t there, Rory, who is sad all the time. And then there is the sleepwalking. The strange banging. The laughter and clapping. And Carolyn’s strange bruises.

Eventually things get so bad that Carolyn tracks down Ed and Lorraine Warren, two paranormal investigators, in the hopes that they can help. At this stage the family have moved downstairs, all sleeping together to try and stay safe. 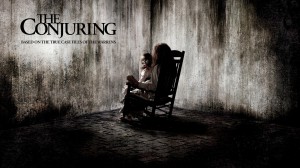 I’m not a huge fan of horror films. For some reason I always think I’ll be freaked out by them, but then when I actually see the film it is never scary enough2. The reason I wanted to see this is that my local cinema weren’t showing the new Ryan Gosling one, Only God Forgives and the trailer for this looked creepy and atmospheric. Those clapping hands… awesome.

In many ways this film worked really well. It built up nicely, plenty of atmosphere and haunting images. I could have a done with a bit more character from the family, but the Warren’s got plenty of backstory which took time. I just sort of expected it to be scarier, it didn’t have quite enough jumpy moments for me, and I think the whole “based on a true story” meant I was less invested in the story. If it had just been presented as fiction then awesome, ghosts and hauntings and things that go bump in the night are brilliant, but I don’t believe in them in real life so that was a distraction.

I did like the way the Warren’s were portrayed, earnest people out to do good, not trying to take advantage of anyone. If the real couple were like that I’m guessing that they really believed in what they were doing. But there are too many “paranormal investigators” on the telly now, you flick by those stupid shows with the night vision cameras and people complaining about the cold or whatever and you know its all fake. And that takes away from this film, through no fault of the films.

Still, overall I’m glad I went to see it, and I wouldn’t want to spend the night alone in a creaky house after watching it. Especially if a pet was reluctant to come in for some reason.

IMDb ; Metacritic | Other reivews: State.ie ; You gotta read this