Sethe and her daughter Denver live in number 124. Denver’s older brothers have left home. Baby Suggs, her grandmother has died. It is just the mother and her daughter, and the ghost. The spiteful ghost of Sethe’s other daughter who died when she was just a baby. Denver never knew her father, she as born after her mother escaped slavery into Ohio. Her father never showed up, no one knows quite what happened to him.

For years Sethe and Denver have lived with the ghost. They are isolated from the rest of the community because of it. But one day a man from Sethe’s past shows up, Paul D lived at Sweet Home, the farm Sethe and her children ran from. He chases out the ghost and brings a bit of life into their home. But he also awakens memories that have yet to be dealt with. 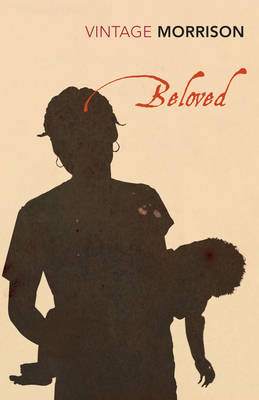 This book is dedicated to “the sixty million and more” a number that refers to the innumerable people enslaved in the American South. And that is what this book is really about. The damage that slavery does.

Obviously there is the violence of slavery ; the brute force required to keep a people in chains. Sethe bears the scars of a whipping on her back. Paul D knows what it is to have a bit in his mouth.

But there is also the psychological damage that slavery and violence cause. The knowledge that you are seen as less, as other. That you can never be an real equal. I don’t think anyone can really understand what that results in, unless they have lived through it, but Morrison does a great job of getting some of it across. The utter despair that life can be. It’s heart-breaking to think of what people went through. What people still go through because of racism.

The edition I have is a Vintage Classic with a reading guide, but I have to say that the quick skim through the reading guide was enough to put me off. The one question that jumps out at me relates to Show Spoiler ▼

the fact that Sethe murdered her daughter, and would have killed her other children if she hadn’t been stopped, to prevent them from being taken back into slavery. The question says, quite simply, was she right? “what would you have done?”

and that question! my god, it is insulting in its ignorance. Such a surface, quick and easy question about such a dark and complicated issue. That question is at the core of the book, of Sethe’s story. It isn’t something that can just be answered yes or no, it is something that only someone who has lived through that situation could possibly even answer. I know that it isn’t a black and white question but a prompt for a discussion, but at the same time it seems so uncaring a question. You’ve read this harrowing story, you’ve gone through it with Sethe. That question seems, to me, to ignore all the personal issues that make this story so powerful.

Anyway… the book. If you haven’t read it I’d highly recommend it. This was my second reading and it was even better this time round. Although I’m not sure I will ever watch the film. I don’t think it’d adapt well, but I may be wrong.