It is 1944 and American pilot Rose Justice is working in England, she has joined the ATA and is hard at work transporting planes for the RAF, and occasionally flying important people about. Returning from one such mission she encounters a doodlebug or Vergeltungswaffe flying bomb. In her efforts to divert it from its course she flies herself off course and is intercepted by some German pilots. Flying armed combat planes. Hers is unarmed, she is civilian, not a combat fighter. They force her to land and Rose finds herself shipped off to Ravensbruck, a concentration camp in Germany, for the end of the war.

I first came across Wein when I read Code Name Verity last year. This book also has an appearance by Maddie, as well another character from Verity, it isn’t really a spoiler to say who that is, but I’m going to let readers find out for themselves, if they don’t already know.

If you haven’t read Verity1 don’t worry about reading it first. This is not a sequel. You won’t really be missing out on anything by reading this one first.

Rose Under Fire is very different to Verity but at the same time it is very similar, heart-wrenching and so very sad. The first part of the book, when Rose is in Southampton really gets across the atmosphere is fear that the war brought to England. The Blitz on the home-front and so many dying off at war. You can really feel the pain, especially when Rose disappears and her family write letters to Maddie. That was the first part that made me cry.

But then we go to Ravensbruck. 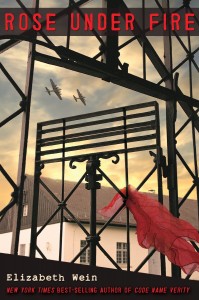 I think that Wein was very smart in the way she wrote about the concentration camp. Rose is writing her diary after the fact, both as a way to tell the world and as a way to process all that has happened to her, so she can skim the terrible awfulness of it, and just describe the average awfulness. As readers we know she came out alive, so we have that one bit of positivity to help us through the read.

It strange that I read this book straight after Beloved because in way both deal with a similar topic, people do terrible things to people. People are forced to live through unthinkable things. And those torturers and “experimenters” and slave-owners believe in what they are doing! It really is almost beyond belief, apart from the fact that we know it happened.

Obviously Morrison is also writing about other issues that Rose, as a white American, didn’t have to deal with, and in a very different manner. But both books, I think, want make sure that the world doesn’t simply forget. Beloved may have happened in the 1800s but America is still dealing with the fallout from then, I’m not sure it has ever really acknowledged how much damage was done at the time, and since. Likewise it is so important to remember what people went through in the concentration camps, not only because of the whole “those who forget the past are doomed to repeat it” but also because the truth is important. Not for vengeance or revenge, but because it is right.

I haven’t said very much about the book itself have I? Well it is wonderful. And heart-breaking. Go read it.

Other reviews : Things mean a lot ; Capricious Reader ; Discussion of the book on See Michelle Read