Two hours earlier, the C.S.S. Dryden has killed its rotation, moving for the first time in fifteen days back to zero-gee.
–Timothy Zahn - Warhorse - c.1990, 2012

For years humans had thought themselves alone in space. But then the Tampies made themselves known. And they, unlike humanity, had the ability to jump through space. Where humans were trapped into a small section of space the Tampies could travel almost anywhere. They had discovered a species that lived in space, these “space horses” they then harness to their spaceships and use them to jump anywhere the horse can see and identify. But although people have tried to capture and tame these horses they have all failed, only the Tampies seem able to.

Which means that the Tampies have a monopoly on deep space travel. And this is not to everyone’s liking. Many people dislike the Tampies and their interfering ways. Tampies see their role in the universe as caretakers, valuing all life and trying to preserve the natural balances and cycles that exist. To them humanity’s tendency to change and alter the natural world is a tragedy.

War seems to be getting closer and closer. In an attempt to see if people and Tampie can work together a ship, the Amity is sent on a mission. It’s crew will be half human half Tampie, to investigate if the two can ever learn to get on. 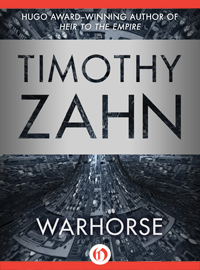 I bought this a few months ago on impulse. It was recommended somewhere, I can’t quite remember where. And I know part of the reason was the fact that it was called Warhorse, even though I knew it had nothing to do with actual horses.

And I’m very glad I gave into that impulse because I really enjoyed this one. It took a few chapters to get going, but once I got stuck in I was gripped. It is a great story, with original aliens and instead of it being a first contact novel it is all about what happens after that initial hello, especially when the two cultures do not share core values.

The two main characters, Roman and Ferrol, are well drawn personalities, and their interactions are really what make the novel work so well. They hold opposing views on the Tampies, Ferrol has a bad history with them while Roman thinks people can learn to get on with them.

I’d certainly be interested in reading more by Zahn.