In post World War II England Jean Paget is tracked down by a solicitor. She is the only surviving member of a client of his, and so stands to inherit his wealth. But because the client didn’t trust single women to run their own finances the will stipulates that Jean is not to receive the full amount, she will get a monthly allowance until she turns thirty five and is old enough to manage herself. Until then Noel will manage the trustfund for her. 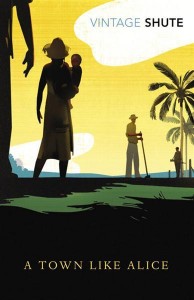 Noel finds Jean working as a typist in a leather goods company. He soon learns a lot about her, and the story flashbacks to when she was in British Malaya during the war and what happened to her there as a prisoner of war.

The book is told from the point of view of Noel, the solicitor. And this works well, at first. He related how he tracks down Jean, and the history of the family. And after they get to know each other a little he tells the reader her story, as she told him. And I really liked the first half of the story. Jean’s story is one of just trying to get on with life, no matter the circumstances. She doesn’t see herself as a hero or anyone especially outstanding. She simply made the most of some terrible conditions. But she is still haunted by that past, and by the events she witnessed. In particular what happened to an Australian who tried to help her, and the other women, out.

Unfortunately once she got to Australia I wasn’t as gripped by the book. It is well told and I did like all the characters, but it just tailed off a little too much into a “this happened, and then this happened” sort of a thing. There were parts that I still enjoyed and liked though, so I wouldn’t let that put me off.

One word of caution, it was written in the 1950s, and it is very much a book of that time, so it is slightly dated and sexist and racist. But if you can get over that it is an enjoyable read, and he is an author that I could read more of. I really enjoyed the slow, but never ponderous, way the story unfolded. And although I had a couple of minor problems with how Noel knew all the little details of Jean’s life, I really liked him as a narrator. He was a great character, utterly normal and predictable. Lucky that the book I borrowed from the library is three collected novels then isn’t it :)