Terrorism is everywhere these days. From Iron Man to Star Trek and everywhere in between, you just can’t get away from it. In this case Capt. Kirk is on the trail of a Star Fleet operative gone rogue. He’s blown up a secret research facility. Tried to kill off the top brass, but Kirk is going to track him down and blow him away. Only one small problem. He is on the Klingon home world, and relations between the Federation and the Klingons aren’t exactly rosey.

But for Kirk it is a battle that has become personal, because this terrorist has killed people Kirk was close to… 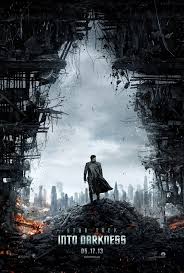 I went into this film thinking I’d enjoy it. I really liked the first Star Trek reboot, I’ a fan of Star Trek in general, and Cumberbatch is full of the awesome. But this film just didn’t work for me. Some of the scenes in it were fantastic. Cumerbatch steals the show when he is on screen, he really is fantastic. And some of the action scenes are great. But it just didn’t gel together properly for me. I simply never got invested in Kirk and his mission. It all felt a little too predictable. I mean who the puppet-master (in a manner of speaking) was was pretty damn obvious from the second he appeared.

And was there any point whatsoever in that Carole character?

And the death scene Show Spoiler ▼

which we all knew wasn’t going to be a death scene at all. Okay, so it was important for Spock’s arc but if you are expecting the audience to care then you have to be a bit less obvious as to how they are going to bring him back to life. Actually, for once, maybe they shouldn’t have. Wouldn’t it really have been a reboot and change to the series to think about the Enterprise without Kirk

but it was obvious that that was not going to happen.