Book Two of The Wheel of Time/p>

All our characters are back together at the beginning of this book, in Fal Dara, resting and recuperating after the end of The Eye of the World. There is a lot for them to deal with, more for some than others, but they all have “issues” of their own now. But almost straight away the group is split up. Egwene and Nyneave are off to Tar Valon while the rest head in pursuit of darkfriends and trollocs, and even then Rand and Loial get separated from the others. Apart from Moiraine and Lan, they are off stage for most of this book, as Moiraine is off researching. 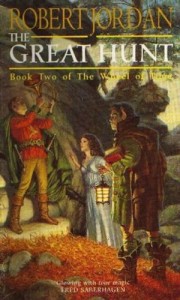 The great hunt by Robert Jordan

And a lot of the first half of the book is establishing what’s going on. There is a fair amount of characters travelling here and then there and then over yonder. And there is a lot of denial going on. Rand refuses to entertain the possibility that he may be the Dragon Reborn. Perrin doesn’t want to talk to the wolves, and Mat, well, Mat doesn’t have much to do but serve as impetus to get the dagger back. Not til the end of the book.

As for Egwene and Nyneave, well they show us what Tar Valon is like as they head off to learn what it is that an Aes Sedai actually is. And boy are they in for a surprise. But they do meet up with Min again, and with Elayne, and learn that Rand has had a impact on the world already, even if it is only to prompt people to think about changing their lives.

But the second half of this book really kicks off the action. The final third in particular is brilliant. I love the build-up to the battle at the end, it really gets the heart pumping.

And we meet the Seanchan, who are awesome and evil and icky all at the same time, I mean the damane, that’s just horrible.

There is a lot going on in this book. And only on rereading it do you realise just how much foreshadowing and hinting at future events was going on. And the Forsaken begin to come on stage. Just hints and occasional appearances, nothing like in later books, but they are there, plotting and meddling. Lanfear in particular. I always liked her. She was evil, sure, but cool.

And Min gets more to do. Yay! Elayne didn’t bother me in this book either. I seem to recall her being quite irritating, maybe that’s in later books. We’ll see what happens.

Rand, as I mentioned, is still in denial, which is understandable, and yet, he is the main character, to have him so reluctant the whole way through the novel is a little off-putting. That’s the problem when your story goes on for too long; the set-up takes too long. I do like the way he grows into the role of “Lord” though. It is a gradual thing, too gradual perhaps, but well done.

I will say that I hate this cover. It is such a standard fantasy-esque picture, and just plain wrong. That scene never happens in the book. And it sets the tone for the rest of the Darrell K Sweet covers. They suck, they suck so much that they are almost cool :)

Other reviews: Val’s random comments ; It’s all about books ; A dribble of ink ; The Wertzone