Part of my RIP Peril Onscreen

Fergal and his mother are on the run. They arrive in a rundown block of flats, clearly hiding out. Mary wants to keep her son safe, but he is a teenager, and trying to live a normal life. Meeting girls, hanging out. Mary doesn’t think this is such a good idea. She won’t force him not to, but she will warn him. Has he forgotten that they are being hunted. A beast is after them. And Fergal’s father is out there somewhere. He has borrowed powers from Mary’s people and he wants Fergal dead. 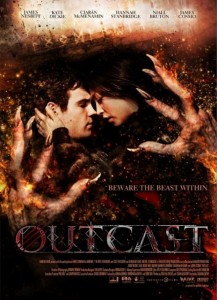 This is one of those films that could be so much better. I could see the potential while knowing that it wasn’t going to really work. It actually feels very much like a book. There is a lot of backstory that isn’t quite explained. Which I liked. But I don’t think the film makers gave the viewer quite enough to really identify or empathise with any of the characters.

I’m not a huge fan of Nesbitt, after Cold Feet he seemed to be everywhere. But he has been in some interesting things, Jekyll I really liked, and he does threatening and dark very well. Mary, the mother, is very otherworldly, and strange. I thought she was great. But the dialogue given to the teenagers didn’t work for me. And I didn’t but the romance, there was no chemistry at all there.

It is a good attempt at something a bit different, but has too many problems to be regarded as a success.

And I also have to take issue with using Travellers as the People. I’m guessing they were some sort of the Good People or the Sidhe, it wasn’t made clear, but they clearly weren’t quite human. And to use a group of people that are already othered in mainstream culture as non-humans strikes me as a bit icky.