Before this review begins, I’d like to just wish everyone affected by the attack in Colorado the very best. I really have no words to express how horrible that was, especially when you read stories like that of Jessica Ghawi’s, who survived a shooting in Canada only for this to happen.

Back to the more mundane of the film itself.

It is eight years since the events of The Dark Knight. In that time Gotham City has enacted the Harvey Dent law, imprisoned countless criminals, and cleaned up the streets. But this is at a price. Batman has taken the fall for Dent’s murder. He is known as a murderer, and has disappeared from the city. Bruce Wayne has also withdrawn from society. He is a recluse, hiding away in his manor.

All is not well though it may look that way on the surface. A storm is coming.

I’m not going to summarise any more than that. Suffice to say that Batman is called upon to make a come-back, and a come-back he makes! 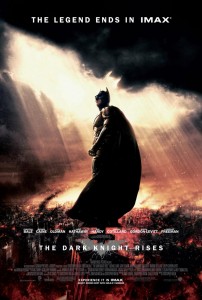 I really really really enjoyed this film. Yes, it has numerous plot holes, it takes a while to get going, Bane, I felt, could have been more intense, and there was a lot of silliness, and other stuff I would have liked to see investigated that was left untouched. But nevertheless, this was a great film.

I did feel that it was bit obvious Show Spoiler ▼

that Miranda was the bad guy. I mean, how many action films have two female characters where one of them isn’t a bad-guy. Actually, that’s quite a sad statement, but I think it is fairly accurate. And we all knew it wasn’t going to Selina, not by the end of the film.

Now, about Bane. I’m still not sure about the accent, but I loved his slightly detached and amused manners. I just wish he would have lost it completely and utterly at some point. He always seemed under control. I would have liked to see Hardy let loose, but I get that that is the character of Bane, so I’m okay with that.

I loved Alfred in this film. You really feel for him, watching this man who has been like a son to him wither away and destroy himself. And then to make a comeback, only to put himself in yet more danger. Plus, everyone loves Michael Caine.

Also, the Tale of two cities allusions were great craic. But maybe the city should have visibly suffered more from the “reign of terror” courts and judgements. Everyone who wasn’t their victim seemed to be doing okay. Show Spoiler ▼

And while I’m back to nit-picking, how on earth did those policemen emerge from being trapped underground looking so healthy and ready for action? But you know, superhero film, so it gets a pass in that regard. And the same answer is the one I’ll give to people complaining about Batman’s back. He is a superhero, and you just *had* to have the “I will break you” moment. It wouldn’t have been Bane without that.

So overall, yes, it has huge plotholes and silliness, but none of that mattered to me while I was watching it, I was just having too much fun.

Other reviews: In bed with books ; Cinema Viewfinder ; The Mary Sue ;