The story of Enaiatollah Akbari, trans. from the Italian by Howard Curtis

When Enaiat is around ten his mother takes him from his village in Afganistan and they travel Pakistan. And then, after a few days, she leaves him there, and goes back home to his younger brother and sister. At first Enaiat isn’t sure what to do. He starts to work for the the man in whose “hotel” he has been abandoned, in exchange for food and board. Later he moves on to selling goods on the street. For this he earns money. 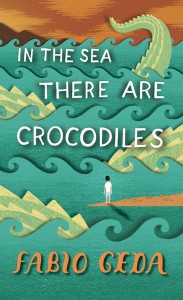 In the sea there are crocodiles

Eventually he leaves the city, looking for work, and then the country, and eventually he attempts to travel to Europe, and Italy.

The author’s note on this book tells me that although he is describing it as fiction, it really is Enaiat’s story, or his story as he recalled it and told to Geda.

And to be honest, the reason I picked this book up was the title and the cover. It is wonderfully eye-catching. I wasn’t so sure about the story itself, I’m not a fan of all these hard-life and misery books that are about. And before I started to read this I worried that it would be far too “woe is me”. In fact, it is pretty much the opposite of that, and that is the problem with is. Enaiat is only interested in telling the things that happened. Not the details of the who and the why and there where, simply the facts. But I found that left it a very spare and sparse book. I could have done with more character from Enaiat, although I sortof understand why they didn’t go down that route.