This is a film that it is best you go see knowing nothing about it. Simply trust in Joss and all will be well, I’m sure you’ll agree.

If, however you do not have faith you may want a little bit of information, but don’t say I didn’t warn you. The story centres on 5 college students who head off on a couple of days break to a cabin in the woods. On their way to this cabin they stop off at a creepy gas station, only to be warned off by a creepy red-neck-type. If you have ever encountered a horror film before I am sure you have spotted the warning signs of impending horror clichés. 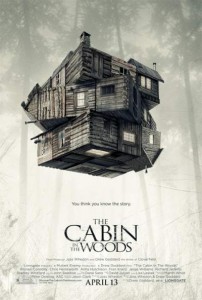 The cabin in the woods dir. Drew Goddard

But don’t worry, there is more to this film than a horror in the woods.

Because as well as the five we also have some mysterious people who are watching these five. Tracking their every move with hidden cameras. They are providing the set-up, but for what..

And honestly, even that is giving too much away.

I really enjoyed this film. It is a horror and comedy, and in typical Whedon-fashion it knows all about audience expectations and it sets out to play with that. However, it isn’t perfect. And it isn’t the best film of the year. It is a great bit of fun, and I would totally recommend it. But there are plenty of flaws with it. For the most part it is great fun, and if that is what you go looking for you won’t be disappointed.

I really liked the way that each of the five were assigned an archetype; athlete, whore, scholar, fool, and virgin, and yet each of them could have fitted into more than one, but were every so gently(not) guided into the correct actions to match their assigned stereotypes.