Set in the not too distant future, Real Steel is all about Robot Boxing. Human boxing just couldn’t live with the public’s demand for yet more violence, and so robots were built to destroy one another. And this high tech violence led to the end of human violence as entertainment, it just wasn’t blood thirsty enough. Despite the fact that there is no blood in robot boxing, they are machines after all. 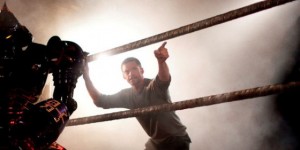 Charlie is an ex-boxer. Now he controls the robots. And of course he is down on his luck, he gets distracted you see. By girls. By drink. By his whole lack of discipline and control. But then an old girlfriend dies and in order to make some cash he agrees to take his son for a few months before signing him over to the kid’s aunt and her ever so rich husband.

Yeah, you know what happens next. Charlie realises that sometimes you have to take responsibility for your life. And himself and the kid become a family, brought together by robots beating the hell out of each other.

And, we knew all that before the film ever started, so you can’t complain about its predictability. And boy is it predictable. Robots fight. Father and son bond. Underdog wins. It’s all good.

Real Steel is a perfectly adequate film. Competently made, directed, acted etc., it does exactly what it says on the tin. But I wouldn’t be watching it again any time soon.