Mabel and Jack have left home and family behind and travelled to Alaska, to the edge of the world, trying to turn the wilderness into a farm that will support them. For Mabel it was an attempt to escape her grief and loss at a childless life. Their only pregnancy ended in a stillbirth. Jack struggles with the farm work. He is no longer young and he worries that they won’t have enough, that he cannot support his wife who deserves more. But as he works harder and longer she is left to brood in the darkness of the cabin. And with winter coming on things look like they may get even worse.

But when the snow comes they suddenly both feel something of the life and fun they have gone without for so long, and they make a child out of the snow. Jack sculpts her face, Mabel dresses her with mittens and hat. And the next day the snowchild is gone, but Jack catches a glimpse of a girl in the forest. One day she follows him home, could she really be their snow child come to life? just like the Russian fairy tale Mabel read as a child.

The first half of this book, and more, I really loved. Mabel and Jack’s story was heartbreaking. 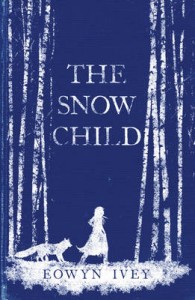 And so believable and realistic. You can see that they still really love each other, but there is a lot of heartache, grief and bitterness between them as well. They don’t really know how to broach that distance between them. Jack works so hard to try and provide for Mabel, but all he sees is that he is letting her down, failing her. He tries to protect her from the hard work, but all that does is isolate them even further from each other.

Neither wants to reopen old wounds, but the thing is that those wounds have never healed. Ignoring them is only making them worse.

The writing in the book is lovely and enchanting. And some of the descriptions of the wilderness are great. Faina is wonderfully unknowable. Is she really their creation, a miracle come to life out of snow, or is she an orphaned child who needs to be taken in out of the wilderness.

Unfortunately towards the end the book seemed to run out of steam. Such a pity because it really started out so well.

That’s not to say that it fell apart, or that it isn’t worth reading. It is. The Snow Child is a beautiful book and I would recommend it to you if you have any interest in fairy tale adaptations. it is just that as I read the final sections I felt more like Ivey wasn’t quite sure of the ending herself, or of what Faina really was. It could be entirely intentional of course, let each reader decide for his or her own self.

This is a book that would be perfect reading for winter, especially if you were sitting in front of a roaring fire :)

Other reviews: Stuff as dreams are made on ; The Book Lady’s Blog ; Book Monkey