It is summer time on the island of Kvaloya, the time of the midnight sun. And Mats Sigfridsson has just drowned. Soon after his brother Harald also drowns. How could they both have drowned on such a calm, peaceful sea? And why had they both chosen to steal the same boat. Was it some sort of a suicide pact between the brothers? Liv Rossdal isn’t so sure. And after ten years thinking about the drownings she still isn’t sure.

Liv was eighteen that summer. Finished school and trying to decide what to do with her life. She had lived on the island inside the Arctic circle for as long as she could remember, her father had never been in her life, her mother had made the decision to relocate to focus on painting. They live an isolated existence, although her mother isn’t as much of a recluse as she and the art world sometimes make out. She has her weekly meetings with her “suitors”, and then there is the neighbour Kyrre Opdahl. A strange old man with her stories and tales of huldra and spirits and people who go out one day and are never seen again. 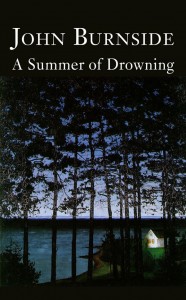 A summer of drowning by John Burnside

This is one of those books that I really have no idea how to review. Because to give away too many details is to spoil it. And yet the plot isn’t the important thing. It is the writing and the way Burnside tells the story. Liv is our narrator. From a distance of ten years she looks back at that “summer of drowning” and tells us what she saw, and did, and witnessed. What she thought about what had happened. So we have that delicious sense of foreboding all the time. We know from very early on that there will be drownings and mysterious disappearances. And the possibility of a huldra.

The huldra is a wild spirit that appears as a beautiful woman, she lures men to their death.

But the huldra does not exist surely. It is a creature from folklore and legend. But then what possible explanation could there be for the events of that summer in 2001? Before you start to get the wrong impression, this is not a fantasy romance with a new supernatural being at its centre, instead it is a strange dreamlike novel that you are much more likely to find in the literary fiction part of you bookstore than the YA.

The thing about this book that really stood out as I read it was the use of language. It really is a lovely book to just read and enjoy. I found myself noting down quotes almost constantly because both the way Burnside writes, and what he writes about really resonated with me. I loved the character of Liv. I don’t think she would be an altogether pleasant person to know, but I could totally understand and relate to her. Maybe not so much to her mother, although I did like the relationship between the two of them.

And I loved the whole atmosphere of the book, the cover image that I have here in this blog is a lot brighter and clearer than the hard copy one. Which is a pity, because the painting and artist are mentioned in the book, and are important, so it would have been nice to have been able to appreciate it more from the outset. But with the interwebs I was more than able to look the painter & artist up. There was quite a lot in this book that I looked up actually. From Norwegian phrases to artists and paintings, so I guess you could also call it an educational book.

One word of warning though, don’t start this expecting a cut and dried story with a neatly tied up plot, because that isn’t what you are going to get here, instead you’ll get a wonderfully written, atmospheric, and evocative novel. I’ll certainly be investigating more of Burnside’s work, I may even try some of his poetry, we’ll see how that goes though :)